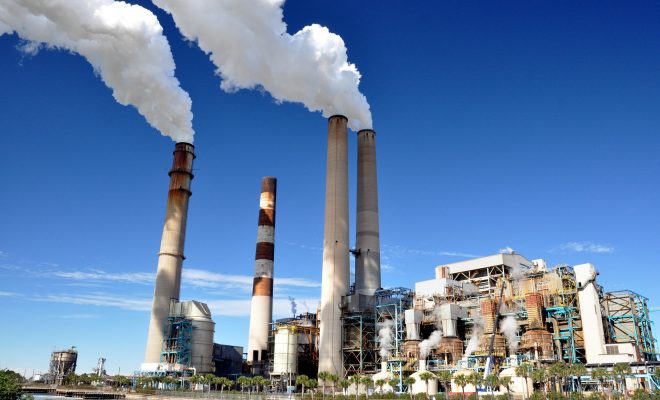 Jerry Brown, the governor of California, made no bones about the dangers of climate change at a public hearing last week, calling it a “threat to organized human existence.” As the Trump Administration removes the U.S. from the frontline in the battle against climate change, cities and states have stepped forward to fill the void.

Monday evening, after hours of intense debate and an energized push from Brown himself, California lawmakers voted to extend the state’s cap-and-trade program through 2030. The current system, implemented in 2012, is set to expire in 2020. Extending the program, which Brown has been trying to spread to other states, has galvanized critics from two disparate corners: liberals and environmental groups who think it is too cautious, and Republicans who see it as a job killer.

But Brown, at 79 and nearing the end of his fourth term in office, has argued cap-and-trade is an effective way to combat carbon emissions while allowing economic growth.

“America is facing not just a climate crisis with the rest of the world, we are facing a political crisis,” Brown told lawmakers at the four-hour public hearing last week, after introducing the cap-and-trade extension bill. “Can democracy actually work? Is there a sufficient consensus that we can govern ourselves? That, I submit to you, is an open question.”

Brown has positioned himself as a buffer against President Donald Trump’s systematic unraveling of the Obama Administration’s climate regulations. In the wake of Trump’s decision to remove the U.S. from the Paris Climate Accord, Brown and a number of other governors and mayors have soothed concerns at home and abroad. Brown recently traveled to China to talk climate change, and will attend a climate summit in Germany later this year.

While other governors and mayors have pledged to double-down on green initiatives and other carbon-cutting regulations, Brown has remained steadfast in his cap-and-trade approach. Championed by those who would like to fight climate change with a market-based system, cap-and-trade issues limited permits to carbon-producing companies, dictating how much carbon they can emit in a given time period. Some permits are free, others are auctioned off; companies can then sell, buy, and trade permits among each other.

But Brown’s extension effort received pushback from environmental groups and state lawmakers. Senate Republicans sent a letter last week to Brown, expressing their opposition to the bill, which is paired with another measure that seeks to improve air quality.

“We are committed to protecting and enhancing California’s environment,” a group of state Republican lawmakers wrote, adding that the cap-and-trade program is a “crushing blow to California residents and small business negatively impacting their quality of life.”

California progressives have also criticized the plan, though for a vastly different reason: many say it does not do enough to halt carbon emissions. Environmental justice groups see Brown’s bill as a capitulation to the oil and gas industry, and argue it includes too many compromises to pro-industry Republicans and moderate Democrats.

“It’s California climate policy that’s been written by big oil,” Amy Vanderwarker, co-director of the California Environmental Justice Alliance, recently said about the bill. “At a time when all eyes are on California, we have to stand strong and say this is not something we can support.”

After the bill passed Monday night, Brown applauded Californians for standing against “the existential threat of our time” by extending the cap-and-trade program. He also thanked both Republicans and Democrats who “set aside their differences, came together and took courageous action.”

Alec Siegel
Alec Siegel is a staff writer at Law Street Media. When he’s not working at Law Street he’s either cooking a mediocre tofu dish or enjoying a run in the woods. His passions include: gooey chocolate chips, black coffee, mountains, the Animal Kingdom in general, and John Lennon. Baklava is his achilles heel. Contact Alec at ASiegel@LawStreetMedia.com.
Share:
Related ItemsCaliforniaCap and TradeCarbon EmissionsClimate ChangeEnvironmentJerry BrownParis Climate Accord