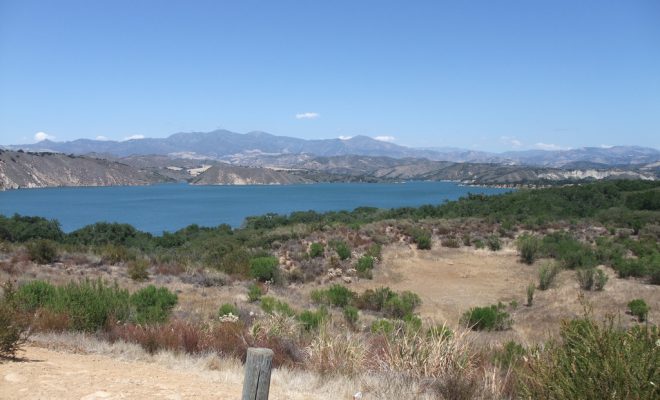 The water crisis in southern California is far from over. The reservoir that provides Santa Barbara County with its drinking water reached its all-time low at 7 percent capacity this summer. The Lake Cachuma reservoir is supposed to hold drinking water for half a million people. But at this rate, it will be unable to provide water as soon as January.

Lake Cachuma is 3,000 acres and provides the surrounding valley with half the amount of water that it needs to refill an underground aquifer that everyone living there uses. Households, businesses, and farms use this water. If California doesn’t get the same amount of precipitation as it did last year, the wells will go dry. The only hope for inhabitants is a winter with a lot of snow and rain, which would also extend into the spring. But if that doesn’t happen, the state needs to step in. And the country has just elected a president who doesn’t believe in climate change. “There is no drought,” Trump claimed at a rally in Fresno in May.

You could solve the California water crisis using all the tears shed over Trump’s election.

“There is very much a drought in California, and it’s been going on for approximately five years. It doesn’t look like there’s an end in sight,” said Emilio Huerta, a California attorney who was running for Congress, to CNBC, earlier this month. He also said there is a “fear of cancer clusters and people being exposed to dangerous toxins” in the water.

Some cities are investigating alternative water sources. In Santa Barbara there are ongoing discussions of whether to ban outdoor use of water, and plans to desalinate ocean water to make it drinkable. The area is known for its huge mansions owned by movie stars, golf courses in constant need of watering, and vineyards that attract tourists from all over the world, and none of this could exist without fresh water. A year ago, water suppliers ordered Californians to cut their water use by 35 percent, something that made many people feel unjustly treated as they let their gardens and trees die at the same time while major construction projects went on as usual.

The city of Santa Barbara released an aerial video to show how much the water level has gone down.

Santa Barbara will spend $61 million to get the desalination plant going, which could provide the city with a third of its water needs. Though it is an amazing invention that can turn seawater into drinking water at a rate of 3 million gallons per day, environmentalists say it’s harmful to the environment. It works by sucking in saltwater through tiny holes in the machine, which can harm ocean creatures, and the salty water that is later pumped back into the ocean pollutes it. The operation also demands a lot of electricity that will contribute further to the emission of carbon dioxide unless it’s generated via renewable energy.

Adam Scow from advocacy group Food & Water Watch believes that to solve the problem, California must change its whole mindset. There are a lot of things that are just not sustainable there–the golf courses, the nut trees, and the overuse of groundwater, to name just a few. “California cannot sustain this type of production with this mantra that we need to dominate all agricultural markets. We’re losing our water with that mindset,” he said to CNBC.

Emma Von Zeipel
Emma Von Zeipel is a staff writer at Law Street Media. She is originally from one of the islands of Stockholm, Sweden. After working for Democratic Voice of Burma in Thailand, she ended up in New York City. She has a BA in journalism from Stockholm University and is passionate about human rights, good books, horses, and European chocolate. Contact Emma at EVonZeipel@LawStreetMedia.com.
Share:
Related ItemsCachuma ReservoirCaliforniaDesalinationLake CachumaReservoirSanta BarbaraWaterWater Crisis