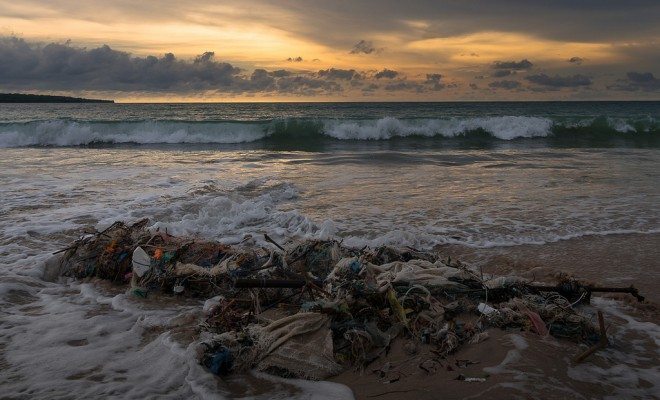 Just How Bad is Our Culture of Plastic Obsession?

Plastic is an absolutely amazing material. It is durable, light, portable, and malleable. It can be made into virtually any product we can imagine. It can be recast, recycled, and reused. It plays a role in every material aspect of our modern lives. But it is usually non-biodegradable, leeches toxins, and if not handled properly can be dangerous to land and ocean environments, animals, and ourselves.

One of the factors that complicated the search for Malaysia Flight 370 last spring was the Indian Ocean Gyre. A gyre is a system of cyclically moving ocean currents, tied into trade winds and the Coriolis Effect. There are five major ones on Earth: in the North and South Atlantic, in the North and South Pacific, and the Indian Ocean. The inexorable motion of the water constantly cast question marks as to where to search for the crashed plane. As the weeks dragged on, the likelihood of locating it in the predetermined locations dwindled; it could have been anywhere by then. Furthermore, search & rescue operators were deceived time and again by what they thought was plane debris. In actuality, it was plastic. The gyres are choked with floating garbage and plastic, earning them the nickname “garbage patches.”

The Earth’s major gyres, courtesy of NOAA via Wikipedia.

Among other things, the 2008 documentary “Addicted to Plastic” details an excursion to the Eastern Garbage Patch in a section of the North Pacific Gyre. Watch the trailer below.

Director Ian Connacher related that the patch is not so much a floating landfill whose contents can be systematically scooped out, but is spread out over an area the size of Western Europe requiring constant painstaking and ultimately minimally effective sifting.

Furthermore, this is not just an aesthetic problem. All new plastic begins life as a “nurdle:” a small pellet that can subsequently be made into whatever product desired. Nurdles account for a large percentage of ocean gyre garbage. In addition, plastic accumulates pollutants such as oils, toxins, and other things that we have also dumped or let run off into our oceans. To the eyes of many fish and birds, nurdles resemble fish eggs and are subsequently eaten. They can choke the animals because they are indigestible, or they can poison the animals because they are riddled with toxins. Then in a process of bioaccumulation, larger fish who eat many of the smaller fish that have ingested nurdles subsequently carry the toxins (and the plastic). Many of these fish are ones that people eat as well; the plastic and toxins work their way back to us and endanger our health, too.

Most of the plastic in the garbage patches arrived there not because it was dumped over the side of ships, but because it was carelessly tossed into the water systems or left on the shores; ocean plastic has worked its way there from the land. Therefore trying to pick all the trash out of the gyres does not stop the problem at the source. The plastic industry is highly flawed and needs to be more properly operated. Greenpeace and others have suggested that governments facilitate more recycling infrastructure and consumers be more conscientious about their use of plastic bags and purchasing products with a lot of plastic packaging. They add that a lot of potential lies with corporations, in regulating and intelligently choosing their plastics. For example, those micro beads in exfoliating products are disastrous and should be eliminated.

These things are only part of the problem, though. Connacher is of the opinion that the regulation of the recycling process and the decisions of corporations in the production process need to be more seamlessly intertwined and cooperative. That is to say, there are problems that make the recyclability of plastic less effective. The cap and ring on a soda bottle is a different type of plastic than is the container. One might be recyclable while the other is not. If they both can be recycled, that may not necessarily be at the same location or by the same means. Inevitably, things get lost in translation. There is nothing that we the consumers can do about this except put our plastics in the bins and hope that everything gets recycled–and properly. Yet these are not unsolvable problems. Scientists in parts of Europe are proposing a “circular economy” with regard to plastics, the idea of which is that “…products must be designed with end of life recovery in mind.” This process has more to do with providing incentives for people to recycle, but theoretically can be applied to the design and production process as well.

“Addicted to Plastic” also provides hope, recounting stories of people who took creative initiative in order to get some of the otherwise wasted plastic out of the environment and put it to productive use. People reduce their plastic consumption on community levels, and researchers and scientists find new types of plastic that are more biodegradable or less toxic. There are things we can do to make the production process better as well as things we can do to address the problematic plastic that is already out there. It requires more than picking it up off the ground or out of the water. It requires major changes, many of which will be difficult. A set of issues like this tends to be overlooked because it does not appear as pressing as climate change or energy regimes; however, it is operating on a global scale, and pervades every aspect of human geography and life. We can emerge victoriously out of our throwaway culture.

Franklin R. Halprin
Franklin R. Halprin holds an MA in History & Environmental Politics from Rutgers University where he studied human-environmental relationships and settlement patterns in the nineteenth century Southwest. His research focuses on the influences of social and cultural factors on the development of environmental policy. Contact Frank at staff@LawStreetMedia.com.
Share:
Related ItemsConservationGyresOceanOcean ConservationOcean GyresOcean PollutionPlasticPollution