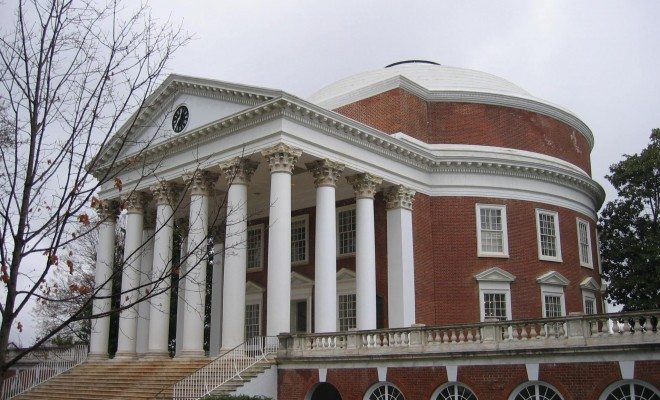 University of Virginia Suspends All Fraternities After Rape Allegations

You might have missed it with all the huge news events within the last week, but there was a Rolling Stone article published last week about a young woman who was the victim of a heinous crime. Seven (yes, SEVEN) young men at a fraternity party raped the woman over a three-hour period. The rape took place two years ago, but now that the story is out UVA President Teresa A. Sullivan has decided to shut down all fraternities until at least January 9, 2015. There will be an investigation conducted during the suspension.

I read the Rolling Stone article and the details are mind boggling. Not just of the before and after but of the rape itself. It was horrifying. After the victim, Jackie, was raped she was able to locate her “closest” friends and tell them about the incident, which resulted in a decision I do not understand. One friend wanted to take her to the hospital immediately while the other two were more concerned about her reputation at the school. I’m sorry but those two kids were NOT your friend, Jackie. When your friends are more concerned about your reputation than your wellbeing, you need to take a good hard look at those relationship. I realize Jackie was in a horrible state but the friend who said she needed to go to the hospital should have put her foot down and taken her. According to the report her dress was drenched in blood and she needed to see a doctor.

I understand that life on a college campus can sometimes be difficult but what is more difficult–having people talk about you for a few weeks because you were raped and reported it or walking around on campus knowing that at some point you will run into your rapists, knowing what they did to you and that they are just living their lives like nothing happened?

I respect the school’s decision to shut down the fraternities and investigate but all of the evidence that was needed to prosecute these scumbags is gone. All that is left is eye witness accounts that aren’t really that reliable, especially after so much time has gone by. I worry about students on any college campus who are more focused on their reputations than justice when a crime is committed.

Allison Dawson
Allison Dawson was born in Germany and raised in Mississippi and Texas. A graduate of Texas Tech University and Arizona State University, she’s currently dedicating her life to studying for the LSAT. Twitter junkie. Conservative. Get in touch with Allison at staff@LawStreetMedia.com.
Share:
Related ItemsFraternityJusticePhi Kappa PsiRapeRolling StoneUniversity of VirginiaUVAUVA President Teresa A. SullivanVictim