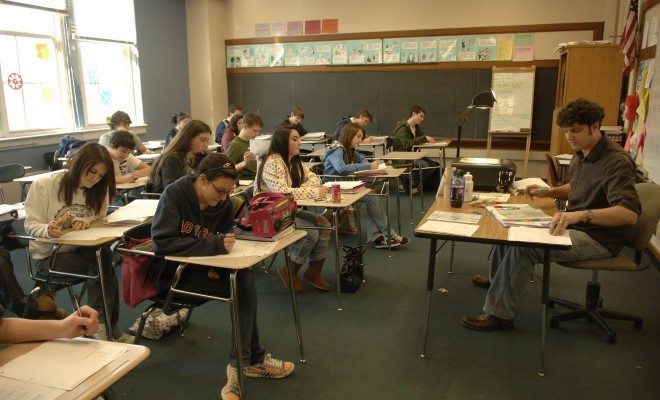 "Greece Odyssey 431" courtesy of [US Department of Education via Flickr]

President Obama’s announcement of the 2017 budget has thrown people for a loop with its liberal cuts and additions. People are starting to realize that, in his last few months as president, liberal changes are on their way. Whether these changes will be quickly undone by a Republican president in the next year or furthered by another Democrat is unclear in this mess of a presidential race that we’ve been seeing thus far. But one of these changes that could potentially have a huge impact on our education system, at least from a health standpoint, is a $10 million dollar cut to grants for abstinence-only sex education. What does this mean for our country? We may finally be able to start educating all our teens nationwide about what it means to have safe sex.

What’s the current state of sex ed in America? Well, for starters, it depends on where you look. One of the biggest problems with our current system is the fact that individual states pick and choose their own curriculums, which leads to discrepancies in what kids are learning. Some states even let counties decide their policies, meaning kids in one school district may be learning all about safe sex while kids only a few miles away are learning exclusively about abstinence. If you have twenty minutes to kill, I highly suggest this John Oliver video on sex education and why it’s so important.

Oliver provides an important–albeit, comedic–analysis of what sex-ed looks like in our country today. In some states, teachers aren’t allowed to show condoms to their classrooms. In others, teachers are still showing videos that shame teens for being sexually active or are blatantly sexist in the way they explain consent. Oliver highlights the ridiculousness of states who try to force abstinence on teenagers and also points out just how polarized the differences in sex education can be from state to state.

The idea behind a lot of these abstinence-only curriculums is the concept that introducing kids to sex will increase the amount of teens having sex at a young age. The abstinence programs are thought to keep kids abstinent, but, in reality, they frequently just lead to unsafe sex because kids don’t know anything about protection against pregnancy and STDs. There are staggering statistics to back up the fact that, in states where there are abstinence-only programs, there are higher rates of teen pregnancy. One of the only states to still have an abstinence-only sex-ed policy (that is, if the schools decide to teach about sex at all, since they are not required to) is Mississippi, which, coincidentally, also has the highest rates of teenage pregnancy in the country. New Hampshire, on the other hand, provides students with comprehensive sex education, which teaches about contraceptives, safe sex, and abstinence. Its teenage pregnancy rates are some of the lowest in the nation.

How are people responding to Obama’s cuts? Some people are thrilled with the cuts. We will be saving millions of dollars a year, and ending up with more educated young people–what’s not to love?

Good news of today: Obama is removing ALL funding for abstinence-only education for his 2017 budget!

Please hold my wand while I do the jumpy-clap dance. https://t.co/DLtygyMZ6t Abstinence-only is garbage. Goooodbye.

Others are not so happy. To those people, I say: look at the statistics. Not teaching your kids about sex isn’t going to keep them from having it, it’s just going to keep them from being safe when they inevitably do. Some people have ironically tweeted angrily about the policy, to show just how ridiculous some of the anti-comprehensive sex-ed opinions really are.

Obama just eliminated federal funding for abstinence-only education so when my son gets pregnant he’ll be hearing from me.

Also in Obama’s proposed budget, along the same vein, is money for expanded access to HIV treatment and prevention for Americans as well as increased benefits under Medicare for pregnant women. Obama is really hitting a home run with the expansion of these programs and, hopefully, it will lead to a healthier and more informed American public. But, until these states start changing their policies on educating young adults about sex, I guess we’ll just stick to the golden rule about sex that we learned from “Mean Girls” and our abstinence-only fifth grade teachers.

Alexandra Simone
Alex Simone is an Editorial Senior Fellow at Law Street and a student at The George Washington University, studying Political Science. She is passionate about law and government, but also enjoys the finer things in life like watching crime dramas and enjoying a nice DC brunch. Contact Alex at ASimone@LawStreetmedia.com
Share:
Related ItemsAbstinenceEducationFederalHealthSex EdSexual Education