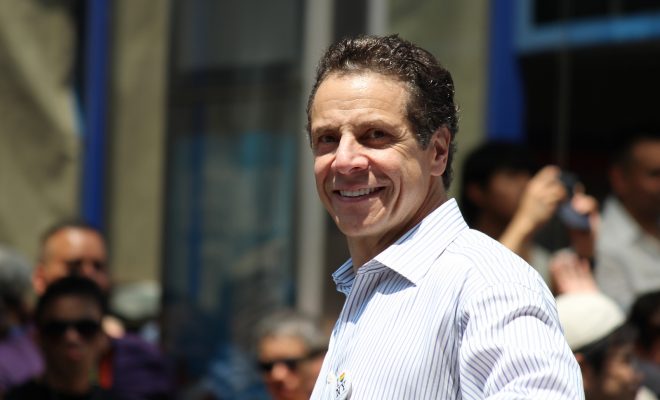 Announced in January and passed by the state legislature on Friday, New York’s Excelsior Scholarship is the nation’s first plan to cover the costs of a four-year public college or university. The program will be rolled out over three years, with the household income threshold for qualifying families gradually increasing each year, starting for the 2017-2018 year. New York Gov. Andrew Cuomo, a long-time advocate for tuition-free colleges in his state, is expected to sign the bill on Wednesday at LaGuardia Community College in Queens.

Though other states–like Tennessee and Oregon–have programs that cover the costs of two-year colleges, the Excelsior Scholarship is the first in the nation to cover the cost of a four-year program, starting with families making $100,000 annually. One controversial aspect of the program is its requirement that recipients live and work in New York after graduation, for as many years as the grant covered. Otherwise, the grant would retroactively become a loan that had to be paid off.

On Monday, Cuomo defended the requirement. “The rationale is clear,” he said. “Why should New Yorkers pay for your college education, and then you take off and you move to California? The concept of investing in you and your education is that you’re going to stay here and be an asset to the state.” The vast majority of students at New York’s public colleges and universities stay in state after graduating, he said, adding,  “if you don’t stay here, then go to California and let them pay for your college education.”

Aimed largely at middle-class students, some are concerned that low-income students would not qualify for the scholarship’s requirements. For one, qualifying students must be enrolled full-time. Many low-income students in New York–60 percent by some measures–enroll part-time because they have to work to supplement their parents’ incomes.

“If you’re really concerned about students who are not attending [college] because of the reality or the perception of unaffordability [sic],” D. Bruce Johnstone, a former State University of New York (SUNY) chancellor, told the New York Times, “this is not the way to help them.” He added: “This is going to cost money, and it will make some parents happy, but I don’t see it moving the accessibility needle.”

But the program is expected to benefit a large chunk of New York’s middle-income student population. SUNY estimates that one-fifth of undergraduates, or 80,000 students, would qualify for the Excelsior Scholarship. The City University of New York, or CUNY, estimates a much smaller group–3,000 to 5,000–of undergraduates would meet the program’s requirements.

Cuomo is sticking by his signature achievement. In a recent Medium post titled “A National First,” Cuomo made clear the scholarship’s intended beneficiaries. The scholarship, he wrote, “will make college accessible to thousands of working and middle class students, and shows the difference that government can make.” The governor’s plan is also earning plaudits from a well-known former New York Senator:

Let’s celebrate New York State getting something important done that we wanted to do nationally. A great step for progressives. https://t.co/CmUZ8njtWF