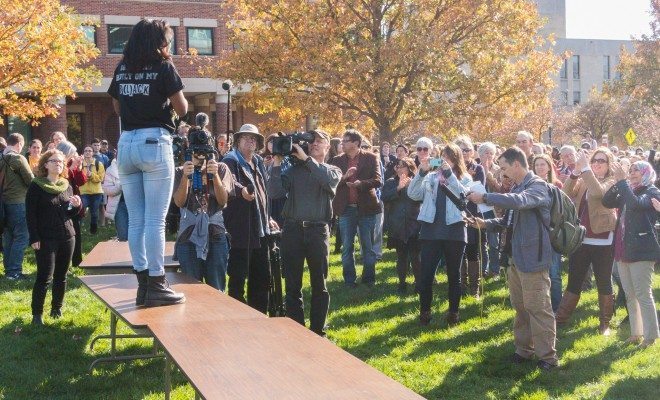 The University of Missouri assistant professor who sparked nationwide controversy for yelling at a student reporter is in the spotlight and raising ethical questions yet again.

Assistant communications professor Melissa Click can be seen on a recently released Columbia Police Department video cursing at a cop who is attempting to clear a road for cars during the Mizzou homecoming parade in October. The footage was taken with two cops’ body cameras.

The footage, first published by the Columbia Missourian, shows Click as a part of a group of student demonstrators who were linked arms blocking the road. The cop can be seen trying to usher the group off of the road and onto the sidewalk in order to allow the parade to continue.

In November, Click, a communications teacher, was captured on video calling for a student journalist to be ejected from a protest site on campus. She requested “some muscle” to help her kick the student out. This incident caused many to call for her dismissal from the university.

So why are her actions especially troublesome and still being talked about now?

Well, what is increasingly frustrating while watching the 12-minute video from November is that the protest as a whole was completely overshadowed by the actions of the professor and the students that she didn’t wish to correct. Instead of a commendable peaceful protest being documented and praised, that message was lost in the actions of few.

Click, while not the center of the entire video, played a vital role in the fact that she did not aid the student reporters by allowing them to do their job. She of all people should have been able to understand their rights just as she understood the rights of the protesters.

All of a sudden the possible headline of “Peaceful Activists Protest for Black Lives Matter Movement,” turned into “Professor Needs Muscle to Block Student Journalists.” And that is really a shame.

The lack of trust of the media is understandable, but should you really shut out someone for trying to accurately document your protest just because they are a journalist? Is it worth the negative backlash from the country just to push a student reporter around whose ‘agenda’ is just to take photos from the event? Not only did the actions of those shown in the video hinder their cause, but it shed such a poor light on the university and the protesters, when it didn’t have to.

What is even more of a shame is the lack of understanding of basic rights. Students were screaming that the photographer, Tim Tai, had to back up and could not legally be there and photograph the event. He was surrounded and barricaded from what was going on and at times pushed by protesters. The right that the students were citing as to why they should be left alone to protest is the same right that allows the journalists to be there documenting what is going on. In addition, they were in public space–which grants the photographer and videographer the right to document freely.

What strikes me most are the ethical dilemmas that come with this debate. As a teacher who is up for tenure, a heavily sought-after academic position, Click will surely be hearing about these two incidents during her deliberations. I hope the board members ask themselves, can she be an effective communications professor if she has gotten herself into these communications conundrums? How can she teach a topic that she herself doesn’t seem to have mastered in her practice? It is certainly hard to support her in her communications endeavors when she curses at cops and calls for the obstruction of the media from a protest on public property.

Check out the November incident in full below (I highly recommend watching the entire video):

And check out the video of the October incident below:

Julia Bryant
Julia Bryant is an Editorial Senior Fellow at Law Street from Howard County, Maryland. She is a junior at the University of Maryland, College Park, pursuing a Bachelor’s degree in Journalism and Economics. You can contact Julia at JBryant@LawStreetMedia.com.
Share:
Related ItemsJournalismMelissa ClickMizzouPoliceStudentsUniversity of Missouri