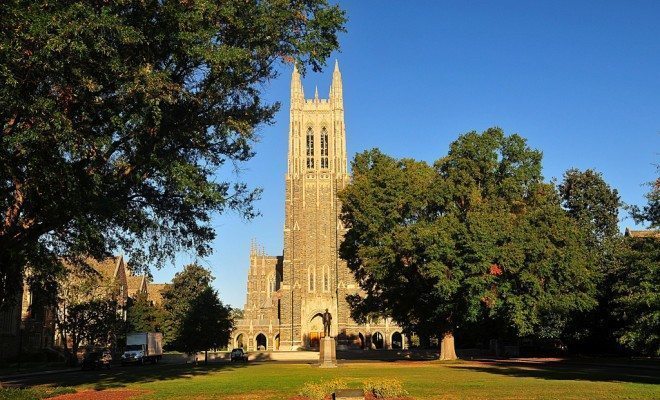 Sit-in protests continue at Duke University, where students are enraged by the actions of some of their school administrators. The protests began last Friday afternoon when nine students occupied the second floor lobby of the Allen Building, home to the school’s administrative offices.

Why are Duke students protesting? Uniting under the hashtag #DismantleDukePlantation, this group of students is reacting to recent allegations of administrators using racial slurs. One instance of this, which is at the forefront of the movement, is the story of how Executive Vice President Tallman Trask hit a parking attendant, Shelvia Underwood, with his car and proceeded to shout a racial slur at her. Trask released an apology after the incident stating:

I want to say a word to the Duke community about my interaction with Shelvia Underwood in August 2014, which has been a subject of much recent discussion.  While the details of what happened are a matter of disagreement and subject of civil litigation, I recognize that my conduct fell short of the civility and respectful conduct each member of this community owes to every other. I express my apology to Ms. Underwood and to this community and re-commit myself to ensuring that these values are upheld for all.

His apology has received a lot of criticism, especially given the contention over whether or not Trask used racial slurs during the instance, which he denies ever doing.

If my students had an assignment to write an apology & they wrote what Trask did, I'd make them do it over #DismantleDukePlantation

We won't stop at the apology, we want Trask's termination! #DismantleDukePlantation #DSWS

Once stories about Trask began to unfold, even more employees came forward, reporting to the Duke Chronicle about what they describe as a hostile and discriminatory work environment and leadership. According to one staff member, instances of the administration using sexist and racial slurs against employees are frequently covered up by the administration.

What are the protesters demanding? The main part of their demand is for Trask and two other administrators to be fired for their abhorrent behavior towards staff members. In addition, the protesters are pulling for an increase in the minimum wage for Duke employees from twelve to fifteen dollars an hour, double the North Carolina minimum wage of seven fifty an hour. Graduate student Bennett Carpenter was quoted saying that the biggest goal is that they “want accountability” especially because “Duke absolutely has a culture of racism, deep structural racism built into the institution.”

A couple of nights ago, the nine students protesting were given amnesty by the administration, meaning they will not be punished for their demonstration. Footage of the night shows students cheering as they learned this news:

Occupying students have been granted amnesty and will not face administrative retaliation #DismantleDukePlantation pic.twitter.com/OEUGStm7jY

Although they aren’t facing administrative retaliation, there has been an attempt to cast this protest in a negative light by the university, as they closed the Allen Building, preventing classes from meeting and disrupting usual business hours. While the school claims this closure was to continue the open dialogue with the students and for safety purposes, the students protesting claim that there was no reason to shut down the school building, other than to cast the protest in a negative light.

Duke released a statement on Monday claiming the following:

The negotiations have continued today (Monday), and it has become clear that reaching agreement on all the remaining demands will require far more extensive conversation, likely to include other members of the Duke community. Closing the Allen Building while these negotiations go on has presented a significant disruption to students, faculty, staff and visitors, and cannot continue indefinitely.

Today, it was announced that the students rejected an offer of concessions from the administration that would improve some of the contested working conditions.

It is unclear how long this protest will go on, but, based on the continued uproar on Twitter, it looks like the protestors are serious about getting what they came for, and they are not alone in their goals on campus.

It's Day 6 on our way to #DismantleDukePlantation. We have been occupying Allen for over 100 hours. We shall not be moved. We will win.

Here’s to hoping everything ends as peacefully as possible. Even if they don’t receive all of their specific demands, the students at Duke University have drawn national attention to an issue that likely affects universities all across America. They are bringing the country one step closer to #DismantlingtheDukePlantation and promoting equality for all.

Alexandra Simone
Alex Simone is an Editorial Senior Fellow at Law Street and a student at The George Washington University, studying Political Science. She is passionate about law and government, but also enjoys the finer things in life like watching crime dramas and enjoying a nice DC brunch. Contact Alex at ASimone@LawStreetmedia.com
Share:
Related ItemsCollegeDuke UniversityHigher EducationRacism