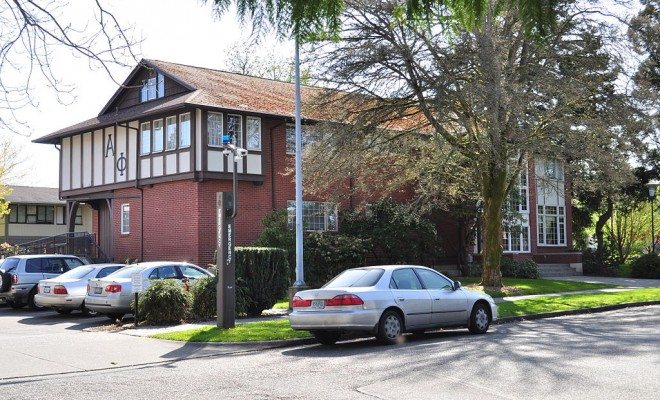 The “Safe Campus” Act has been met with significant criticism since it was introduced into Congress this summer. There are a few troubling aspects to the proposed legislation, but one in particularly really stands out: unless rape victims report their assaults to the police, the school isn’t allowed to investigate them, or levy any sort of action against the accused. This bill was supported by much of national Greek Life–both the North-American Interfraternity Conference and the National Panhellenic Conference were on board. But one sorority–Alpha Phi–just broke from the NPC to say it doesn’t endorse the deeply problematic bill.

Alpha Phi released a statement obtained by the Huffington Post today that outlined the organization’s views on the bill. It explained:

We are writing at the request of many of our members and chapters to clarify Alpha Phi’s position on the 2015 Safe Campus and Fair Campus Acts which have been endorsed by the National Panhellenic Conference. Alpha Phi has not endorsed this legislation and has not committed to any financial support.

We believe our sisters who are survivors should have choices in how, when and to whom they go to for support or to report the crime. They should have their own voice and the support and encouragement they need to move forward including reporting as they choose to.

The issue critics have with the Safe Campus Act isn’t necessarily that police shouldn’t be the ones looking into a crime. Rather, the act would hamstring universities’ abilities to take any actions. Given that police investigations and convictions can take years, groups that oppose the act are arguing that a school should be able to work in the meantime to provide a safe environment for its students.

Additionally, requiring victims of rape to report their assaults to the police opens up a whole new set of issues–including the fact that rape victims often aren’t treated with respect or dignity. Dana Bolger, co-founder of Know Your IX, an advocacy group, explains:

Many survivors of color, who experience police surveillance and brutality every day, don’t want to go to the very people who have been agents of violence against them. And for male survivors and survivors assaulted by someone of the same sex, reporting to the police won’t do anything: Many states still don’t recognize rape against people of the same gender, or against men, as rape at all.

There are other arguments against the Safe Campus Act as well–for example, many other crimes (drug possession, alcohol violations, etc) are able to be handled with schools without involving the police.

It’s unclear exactly which reasons motivated Alpha Phi to clarify its position on the bill, but the organization’s executive director, Linda Kahangi explained:

Many of our members — both collegians and alumnae — had expressed concern that NPC’s endorsement of these two bills implied that Alpha Phi had endorsed them. We wanted to clarify to them that we had not.

It’s an important clarification, and will hopefully cause some of the other Greek Life fraternities and sororities under these umbrella organizations to question their involvement as well. While making campuses safe for all is a great goal, the Safe Campus Act falls too far short to fit the bill.