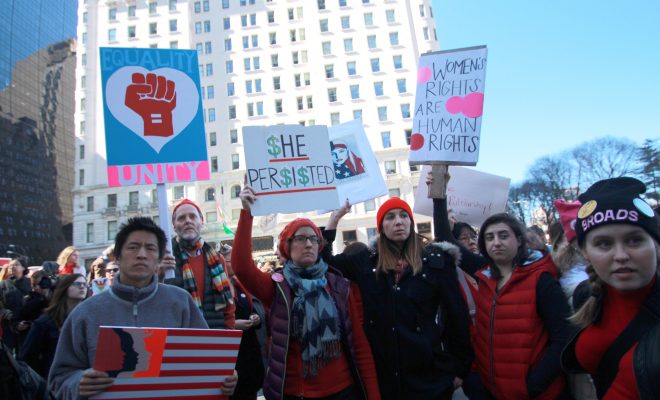 On International Women’s Day, women took to the streets of New York City (and other major cities) to protest gender inequality and highlight what a day without women would look like. Many women took the day off from work to symbolize how much they contribute to society, and many were dressed in red, which was chosen by the organizers to signify love and sacrifice. The nationwide initiative was organized by the same group that was behind the Women’s March on Washington. Around noon on Wednesday, about 1,000 protesters gathered on Fifth Avenue to listen to organizer Tabitha St. Bernard, founder of youth violence prevention organization LIFE Camp Erica Ford, radio personality Angie Martinez, and others speak about the issues that brought them there today.

“I’m striking for the fact that we have a pussy grabber in the White House,” said Adina Klein, who said she is a rape survivor herself and that the election was a real trigger for her. “It’s been horrible. I’m striking for his disgusting cabinet appointments, I’m striking for the repeal of the ACA, I’m striking for all the women in my life that can’t strike.” She noted that she was lucky to be able to attend the demonstration without risking her job, as she could take a personal day from work.

There is still a pay gap between men and women in the U.S. Right now women make about 79 cents for every dollar a man makes, which was one reason that Erica Jaffe went to the protest, along with her mother Jill. “Wage inequality is something that follows you your whole life. It usually starts when you’re 30, when it really widens, and after that point it’s really hard to catch up. It’s not fair,” said Erica. “It’s got to stop.

Although the focus of the day was on women’s rights–equal pay, the right to choose, and gender equality in general–many signs and chants also highlighted other causes. There were calls to save the Affordable Care Act, to welcome refugees and immigrants, to fight for transgender rights, and to impeach Donald Trump. As the mass of protesters started marching west toward Trump International Hotel, organizers and protesters gathered in the middle of the roundabout in Columbus Circle, prompting calls from police to disperse. In the end, some of the organizers were arrested.

Despite the arrests, the demonstration was peaceful and there were many families with children and babies. The march only went a couple of blocks to the Trump International Hotel by Central Park South, where people stopped and chanted at the building. The atmosphere was calm, even hopeful. Maybe it was because so many people of different genders, ethnicities, and ages came together, united.

Although I noticed one lonely Trump supporter in a red Make America Great Again hat who was walking around with two friends, heckling female protesters, nobody paid any attention to them. The focus was on the more important message–that women deserve as much respect as men.

“I’m a woman. And under current circumstances this is a pretty radical thing to stand up for,” said Ulli Barta. “It’s unbelievable what nowadays is being considered as the norm.”

Marina Garcia-Vasquez agreed that being a woman is enough to protest in today’s political climate. “I’m here in solidarity and to support women’s rights in the workplace, as mothers in the workplace, and as women in society,” she said. “I mean the list goes on; reproductive rights, basic healthcare, anything, it starts from the basis of being a woman and demanding equal rights.”

Check out some more photos below:

Emma Von Zeipel
Emma Von Zeipel is a staff writer at Law Street Media. She is originally from one of the islands of Stockholm, Sweden. After working for Democratic Voice of Burma in Thailand, she ended up in New York City. She has a BA in journalism from Stockholm University and is passionate about human rights, good books, horses, and European chocolate. Contact Emma at EVonZeipel@LawStreetMedia.com.
Share:
Related ItemsDay Without a WomanDonald TrumpInternational Women's DayPeaceful ProtestProtestTrump International HotelWomen