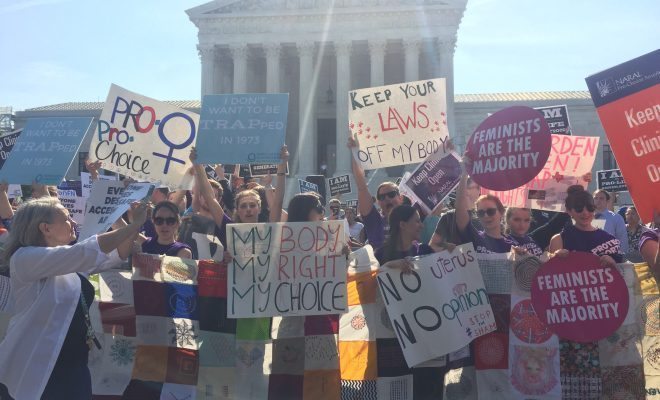 Monday morning at 9 AM people were lined up outside of the Supreme Court to finally find out what the decision would be in Whole Woman’s Health v. Hellerstedt. In a surprising turn of events, the decision swung in favor of Texas abortion clinics, striking down strict state regulations that had forced around half of the state’s abortion clinics to close in the past few years. When the 5-3 decision was announced, the crowd went wild. Queen’s “We Are the Champions” played; bystanders chanted; families who were just trying to see the Supreme Court on vacation looked confused but excited to be a part of history. This decision has the potential to be monumental in the world of reproductive rights, which may be why it drew such a large crowd of people from all different backgrounds. The morning was historic and, to capture the feeling of what it was like to be there, here are the top eight signs seen outside the Court as the interns were running to retrieve the decision.

Phoebe’s sign is all about pointing out the irony in some conservatives’ opinions. So the government should have no ability to regulate a large corporation, but can tell a woman what she can or cannot do with her body? Perfectly alright.

Alexandra Simone
Alex Simone is an Editorial Senior Fellow at Law Street and a student at The George Washington University, studying Political Science. She is passionate about law and government, but also enjoys the finer things in life like watching crime dramas and enjoying a nice DC brunch. Contact Alex at ASimone@LawStreetmedia.com
Share:
Related ItemsAbortionLeslie KnopePro-ChoicePro-LifeRBGSCOTUSWhole Woman's Health