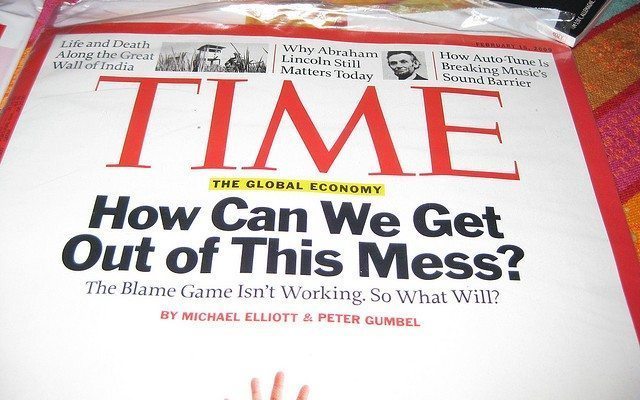 TIME Ends Feminist-Banning Poll, But It’s Too Little Too Late

Okay, so it didn’t try to ban it as much as it suggested that it should be banned–in a poll asking readers to vote which word should be removed from the English language.

Which is still a problem.

TIME is kind of a big deal. I mean, it is nationally recognized for breaking news and excellent writing. So why would a high-brow publication imply that “feminist” is a bad word? And why in the world would it place it alongside words whose use absolutely should be forbidden like “bae” or “turnt”?

Apparently, TIME does not think feminism itself is bad. It just think the word is bad. Yes, let’s by all means quit using the word associated with such a fantastic movement. What would it have us do instead, telepathically communicate our feminist discussions? Keep fighting for feminism, but without talking about it?

The reasoning behind its inclusion on the list seems simple: “When did it become a thing that every celebrity had to state their position on whether this word applies to them, like some politician declaring a party? Let’s stick to the issues and quit throwing this label around like ticker tape at a Susan B. Anthony parade.”

Just because celebrities decide to discuss feminism does not mean it is any less important. Besides, celebrities discussing the movement keeps it in the news and in discussions. That is good! As for whether or not “this word applies to them,” doesn’t feminism apply to everyone with social or political views? As in you either agree with feminist ideals or you don’t?

To make its argument even more irrelevant, its cover girl this issue is Taylor Swift–a recently declared feminist–who even discusses her adoption of the title in her TIME interview. The inconsistency is astounding.

For awhile, “feminist” was the option that was ahead in the polls–thanks for the most part to troll factories like 4chan.com and 9gag.com, which have made news recently for targeting feminist celebrities by leaking their nude photographs.

Luckily, TIME editors came to their senses and discontinued the poll. Managing editor Nancy Gibbs even inserted a little note on the article:

TIME apologizes for the execution of this poll; the word ‘feminist’ should not have been included in a list of words to ban. While we meant to invite debate about some ways the word was used this year, that nuance was lost, and we regret that its inclusion has become a distraction from the important debate over equality and justice.

Thanks, Nancy, but maybe you should have caught on to the loss of its “nuance” before the poll was published. Instead of inviting a debate focused on feminism’s true meaning, you invited anti-feminists to exploit the polls and brought negative attention to the concept.

In response to TIME, I will conduct a poll of my own in which you vote on which word is worse than “feminist.” Tweet your vote to @TIME and be sure to include #wordsmoreannoyingthanfeminist. Here are your choices:

Let TIME know what you think.

Morgan McMurray
Morgan McMurray is an editor and gender equality blogger based in Seattle, Washington. A 2013 graduate of Iowa State University, she has a Bachelor of Arts in English, Journalism, and International Studies. She spends her free time writing, reading, teaching dance classes, and binge-watching Netflix. Contact Morgan at staff@LawStreetMedia.com.
Share:
Related Items4Chan9gagCelebritiesFeminismFeministOnline PollsPatriarchyTaylor SwiftTIME