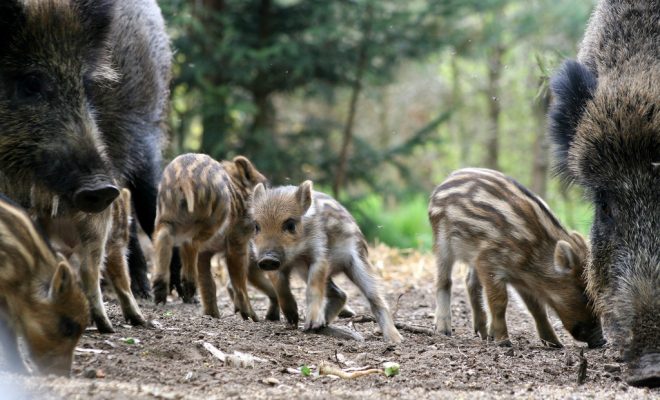 The Texas War on Wild Pigs: The “Hog Apocalypse” is Here

Texas has a feral hog problem. There are over two million wild pigs in the state and they can cause big problems for landowners–the state Agriculture Commissioner Sid Miller even says they eat newborn calves and lambs. ICYMI, Miller was the guy who introduced the practice of hunting boar from helicopters, something he takes so much pride in that he keeps a toy helicopter and a boar head on the wall by his office. But now he has come up with an even more efficient way of reducing the number of hogs.

This new method is a poison, by the name of “Kaput Feral Hog Lure.” “This solution is long overdue. Wild hogs have caused extensive damage to Texas lands and loss of income for many, many years,” Commissioner Miller said. “With the introduction of this first hog lure, the ‘Hog Apocalypse’ may finally be on the horizon.”

The main ingredient, warfarin, is an anticoagulant that has been used for many years to fight the hog problem in Australia. Considering that the boars uproot city parks, landscaping installations, and crops; can pose a physical danger to humans when crossing highways; carry viruses and parasites; and can feed on local endangered species, the Texas Department of Agriculture was happy to find a new method. But what the press release from the department doesn’t mention is that warfarin kills the animals slowly and painfully–it would take one to two weeks for a boar to die. It also doesn’t mention that Australia has been phasing it out for the past few years because of those inhumane issues.

This is not how you manipulate wildlife.
Makes a lot of us sick to think of. 😓https://t.co/HtGsuYpgXD
Quoted @texashoghunters

The Environmental Protection Agency approved the pesticide in January, but the Texas Hog Hunters Association does not approve. The organization has partnered with other groups of conservationists and trappers and started an online petition protesting the toxin–so far it has about 7,200 signatures. The group argues that it’s pretty likely that the toxin could accidentally sicken humans who unknowingly eat a poisoned pig. But Miller’s counter argument is that the poison contains a blue dye that will turn the boars’ insides blue so that it will be obvious if the pig is poisoned or not.

There’s also the argument against animal cruelty. Stephanie Bell from PETA, said that it is not right that wild animals should suffer just because they’re trying to survive. Besides, she points out, humans brought boars to America in the first place, for hunting. Former researcher with the U.S. Agriculture Department, Tyler Campbell, compared the effects of warfarin to those of rat poison. “They bleed. Internally and externally, usually for a week or more before they die,” he said. And he also pointed out that there is no way to ensure that other animals don’t eat the poison, and end up spreading the warfarin even deeper into the eco system. “The wildlife community at large has reasons to have concerns,” Campbell said.

This is awful. The proposal is to poison the hogs with warfarin which *is not selective* for hogs and can permeate the ecosystem. https://t.co/u4yXzNWteq

Louisiana politicians are considering using the poison as well. But state wildlife veterinarian Jim LaCour is hesitant. He said that even with precautions meant to make the food accessible to hogs only, such as heavy lids, it is impossible to guarantee that other clever animals, like raccoons, don’t learn how to lift the lids. Hogs are also likely to make a mess when they eat, dropping crumbs on the ground where birds and small rodents can pick them up.

Pigs are highly intelligent animals and their genome is rather similar to ours. It seems like an unnecessarily inhumane option to knowingly expose them to drawn-out and painful suffering when humans were the ones that introduced them to this country in the first place.

Emma Von Zeipel
Emma Von Zeipel is a staff writer at Law Street Media. She is originally from one of the islands of Stockholm, Sweden. After working for Democratic Voice of Burma in Thailand, she ended up in New York City. She has a BA in journalism from Stockholm University and is passionate about human rights, good books, horses, and European chocolate. Contact Emma at EVonZeipel@LawStreetMedia.com.
Share:
Related ItemsAgriculture CommissionerAnimal CrueltyBoarsHogsKaput Feral Hog LurePETAPigspoisonSid MillerTexasTexas Department of AgricultureWarfarin