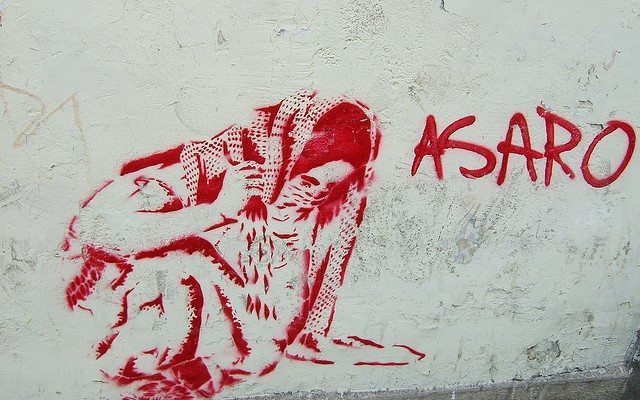 Graffiti Describes the Struggle of Immigrants and Undocumented Minors

“Washington must understand that if you have a Central America with violence because of the drug traffic crime, a Central America without opportunities, without growth in the economy, it is going to always be a problem for the United States,” said President Hernández of Honduras. The root causes, Hernández went on, are not America’s lax border polices, but rather the demand for illegal drugs in North America, which fuels violence in Central America, causing migrants to flee their homes. In a joint statement on Friday, President Obama and the three Central American leaders pledged to address the “underlying causes of immigration by reducing criminal activity and promoting greater social and economic opportunity.”

What this estimation overlooks, though, are the perspectives of the immigrants themselves. What causes them to submit to a perilous exodus, vulnerable to a harsh desert climate, drug violence, and personal injury crossing rivers and fences, all at the likelihood of being detained by U.S. border security, and possibly being sent back? Drug violence may very well be a cause for the flight of immigrants, but I am skeptical to hear this from leaders of governments who have vested interests in the economic exploitation, and repression of their citizens. Rather, we should listen to the people.

In Central America, graffiti is a voice for a voiceless people: the agrarian peasants and the urban poor. Graffiti is an alternative medium of communication that broadcasts messages that corporate media outlets such as radio and television fail to incorporate. It is an open forum of dissent, writ large on the side of a government building, or across a freight car, traveling throughout the region. More importantly, graffiti is a vantage point from which we can discern the perspective of Central American immigrants, and the pressures behind their flight.

Ciudad de Juárez, the capital of Oaxaca, Mexico, six hundred miles from the Guatemalan border, is home to the Assembly of Revolutionary Artists of Oaxaca (ASARO). Comprised of multiple graffiti crews and independent artists, ASARO was forged in the summer 2006 following the violent state-oppression of teachers demanding better pay and working conditions. Forty-five hundred federal police forcibly removed the teachers from the streets, injuring 92 protesters and killing 17, including an American news correspondent. The brutal government crackdown on protests mobilized disparate activist groups against the government, which they saw as a common cause of their plights, and ASARO emerged as a visual amplification of their dissent through the streets of Ciudad de Juárez.

What is more interesting, though, in regard to immigration to the United States, is the political motive and content of the ASARO graffiti. In their images and slogans, we find the root cause of strife afflicting the people in Mexico and Central America, and ultimately the systemic causes for the massive waves of immigration to the U.S. over the last five years.

“The assembly of revolutionary artists arises from the need to reject and transcend authoritarian forms of governance and institutional, cultural, and societal structures, which have been characterized as discriminatory for seeking to impose a single version of reality and morality[.]” – ASARO Manifesto

In Oaxaca, where 80.3 percent of the population lack sanitation services, street lighting, piped water, and paved roads, ASARO illuminated institutional prejudices against ethnicity, class, and sex, keeping eight out ten people in extreme poverty. Their graffiti critiqued the violence of the Mexican government in the 2006 uprising, but also demanded  equal rights for disenfranchised groups like farm workers, indigenous people, and women, as well as exposing the hypocrisies and corruption of the ruling elite. Slogans such as “Todo el Poder al Pueblo. Colonos en Pie de Lucha” (All the Power to the People. Neighbors on our feet to fight!) incited reflection and fiery debates on issues ranging from the privatization of public goods, to gender equality, democratic participate, and Indigenous rights. Moreover, images of the Oaxacan governor labeled “Cynic, Thief, Autocrat, Repressor, Murders,” and “End Fascism in Mexico!” rallied protesters against the government.

“Todo el poder al pueblo. Colonos en lucha” (All Power to the people. Neighbors, on their feet for the fight). Courtesy of nataren via Flickr.

In addition to social struggles in Mexico, ASARO’s political graffiti illustrate issues that affect Central America broadly, such as the economic exploitation of natural resources and labor by transnational corporations, as well as documenting the physical and emotional trauma of immigration. ASARO’s political graffiti critiqued the extraction of oil and minerals from Oaxacan land, which is exported by the Mexican government at an exorbitant profit, without benefit to the Oaxacan people. One ASARO poster featuring a barefoot peasant tilling the land read, “La Tierra es de queen la Trabaja” (The earth belongs to those who work it); a wood-cut block print depicted Uncle Sam under an eagle drinking from an oil can, kicking miniature figures with guns, who represent the Mexican people.

These critiques of foreign exploitation not only speak to conditions in Mexico and Central America, but suggest a system of global colonization by transnational corporations. A block print called Body Parts on Railroad (2010) documents the perils of immigration. Body parts litter train tracks leading to the U.S.: a leg labeled “Salvador,” a finger labeled “Mexico,” a hand “Honduras,” and a head “Guatemala.” Similarly, another block print depicts small animals standing at the opening of a sewer drain like those used by some immigrants to enter the U.S., that runs under a border fence replete with police and an American flag.

In all, the political graffiti of Oaxaca, Mexico demonstrates that there is much more to the immigration debate than just the quips of politicians. In order to understand the root cause of the recent wave of unaccompanied child immigrants, and in order to address this crisis adequately, discussions must include the perspectives of the immigrants themselves. Drug violence is not the only cause for immigration from Central America; but rather a host of systemic issues force immigrants to travel to the U.S. Government corruption and economic exploitation are, perhaps, the most intolerable conditions for the people, as evidenced by the ASARO graffiti. Only from the oppressed can we fully understand their oppression; graffiti is the voice of the subaltern.

—
Ryan D. Purcell (@RyanDPurcell) holds an MA in American History from Rutgers University where he explored the intersection between hip hop graffiti writers and art collectives on the Lower East Side. His research is based on experience working with the Newark Public Arts Project and from tagging independently throughout New Jersey and New York.

Ryan Purcell
Ryan D. Purcell holds an MA in American History from Rutgers University where he explored the intersection between hip hop graffiti writers and art collectives on the Lower East Side. His research is based on experience working with the Newark Public Arts Project and from tagging independently throughout New Jersey and New York. Contact Ryan at staff@LawStreetMedia.com.
Share:
Related ItemsCentral AmericaChildrenDrug PolicyDrug WarsEl SalvadorForeign PolicyGraffitiGuatemalaHondurasImmigrantsImmigrationMexicoPolitical GraffitiUndocumented MinorsUndocumented WorkersViolence