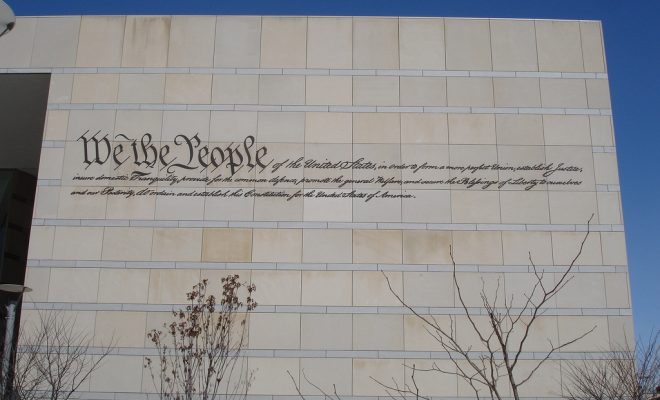 Steve Crump is a Hero: Black Reporter Schools Racist on the Constitution

On October 8, Steve Crump, a veteran WBTV reporter, was in Charleston, South Carolina reporting on the cleanup efforts following Hurricane Matthew, when he was accosted by a racist. Crump told the Washington Post that the man said, “‘There’s a black guy here. No, wait a minute, he’s a slave. No wait a minute, he’s a ‘n-word.'” At that moment he had a choice–ignore the white man’s casual use of the “n-word,” or confront him. He chose the latter, and he caught it all on tape.

“Say that a little bit louder,” Crump said to the young man sitting outside the Saint John the Baptist Roman Catholic Cathedral filming the neighborhood with his iPad. “Come on, what did you just call me?”

“I called you ‘Sir,’” said the man later identified as 21-year-old Brian Eybers.

To which an eerily calm Eybers replied, “I believe I did call you the n-word.”

Eybers then argued that “the Constitution of the United States” gives him the right to call Crump a n***a and a former slave. In fact, it even makes him “superior.”

“You do have a First Amendment right,” said Crump.

This is where Crump lays down some quality knowledge for this desperately naive young man.

In case you were wondering (cough) Eybers (cough), the Ninth Amendment reads:

The enumeration in the Constitution, of certain rights, shall not be construed to deny or disparage others retained by the people.

And the Fourteenth Amendment–since I’m sure you didn’t know that one either– reads in part:

Perhaps if he had actually known the text of the Bill of Rights he was so quick to list off–as well as the Constitution–he would have had a second thought before using it as justification for his racist and offensive behavior.

But it’s ok, because there is such a thing as karma!

However, Crump holds no ill will for the man. He told the Charlotte Observer that he’s forgiven the man and is praying for him.  He also hopes “he gets help by enrolling in an anger management program or drug counseling.”

Watch Crump and Eybers’ Encounter Below:

Alexis Evans
Alexis Evans is an Assistant Editor at Law Street and a Buckeye State native. She has a Bachelor’s Degree in Journalism and a minor in Business from Ohio University. Contact Alexis at aevans@LawStreetMedia.com.
Share:
Related ItemsBrian EybersCharlestonRacismSaint John the Baptist Roman Catholic CathedralSouth CarolinaSteve CrumpWBTV reporter