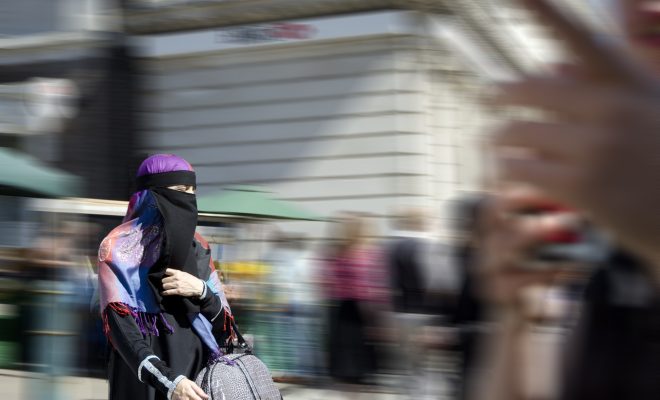 In case you missed it, a super cool music video of Saudi women doing everything they are not supposed to do has gone viral. The video has been viewed millions of times in the past few weeks alone.

At the start of the video, several Saudi women enter a car with a little boy in the driver seat, since women are not allowed to drive. They are wearing full niqabs covering everything but their eyes. But when the camera cuts back to them outside the car, it turns out they were wearing colorful patterned clothes underneath. They start skateboarding, playing basketball, riding toy cars, and dancing. The women still wear the niqabs over the other layers throughout the video but they also wear Converse shoes and lots of eye makeup. And all of them seem to have a great time.

“The name of the song is ‘Hwages,’ which means something like ‘concerns’ or ‘obsessions,’” said NPR Music’s Anastasia Tsioulcas. “And the lyrics are pretty subversive. They start out, ‘May men disappear, they give us psychological illnesses/none of them are sane, each one has an illness.’” Also, in the middle of the video, there is a cutout of Donald Trump at a podium, with a sign saying “The House of Men” in Arabic.

Tsioulcas said that no one knows who the women are, but that the video’s director is Majed Alesa, who has millions of followers in Saudi Arabia. She also noted there has been more positive feedback than negative, despite the controversial content. Maybe it is time for the most gender-segregated country in the world to start to change?

During the fall, there was a campaign in Saudi Arabia aiming to end the guardianship system that requires women to have male permission before doing many important tasks. More than 14,000 women signed a petition and submitted it to the government. Some of the things women can’t do in Saudi Arabia include drive a car, wear revealing clothes or makeup, interact with men, go to public swimming pools, or even try clothes on when shopping. They are also not allowed to compete in sports at home, but the country did send female athletes to the London Olympics. Conservative clerics then called the athletes “prostitutes.”

Many believe change is within reach, and this music video might just be a proof of that. Check it out!

Emma Von Zeipel
Emma Von Zeipel is a staff writer at Law Street Media. She is originally from one of the islands of Stockholm, Sweden. After working for Democratic Voice of Burma in Thailand, she ended up in New York City. She has a BA in journalism from Stockholm University and is passionate about human rights, good books, horses, and European chocolate. Contact Emma at EVonZeipel@LawStreetMedia.com.
Share:
Related ItemsFeminismGuardianshipInternetMajed AlesaMiddle EastMusic VideoNiqabSaudi ArabiaSaudi WomenViral