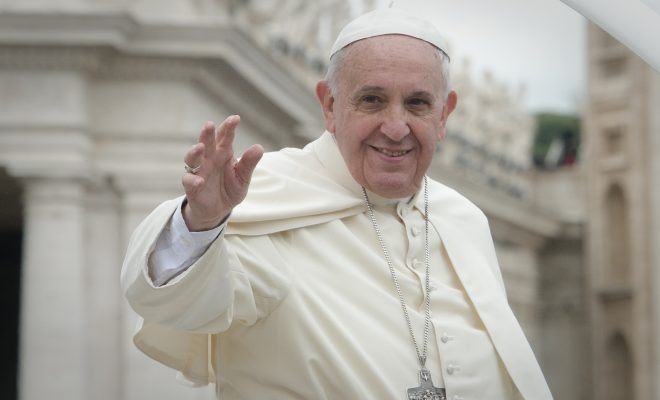 Pope Says Women Will be Banned from Catholic Priesthood Forever

When Pope Francis talked to reporters during his flight from Sweden to Rome on Tuesday, he said he believes women will be banned forever from becoming priests in the Catholic Church. He had been in Sweden, one of the world’s most secular countries, to visit the very small Catholic community that is mostly made up of immigrants, and celebrate the 500th anniversary of the Reformation. Progressive Sweden has the world’s first lesbian bishop, Eva Brunne of the Church of Sweden, and allows same sex marriage for everyone.

“I want to see women priests in the Catholic Church and I know that there are many Catholic women who are well-educated and would be excellent priests,” said Sweden’s first female Lutheran Archbishop, Antje Jackelén to AFP during the Pope’s visit.

When leaving the country, a female Swedish journalist asked him whether he thought the Catholic Church should allow women as priests in the future. His answer was: “St. Pope John Paul II had the last clear word on this and it stands, this stands.” When the journalist asked again, “But forever, forever? Never, never?” he answered that he believes it is going “in that direction.”

The Catholic Church had always had the tradition of male-only priests, but in 1994 Pope John Paul put down in writing that women are not welcome in the priesthood, which is the document Francis was referring to. The common argument against female priests is that Jesus only ordained men as his apostles. But opponents of this view say that was only because he was following the customs of that time.

I don’t have a nuanced view on this. Just deep disappointment. Pope Francis: Ban on Female Priests Likely to Endure https://t.co/UaSWLtsnWr

Many people who see Pope Francis as the liberal Pope who has modernized the church are disappointed with his statement and hope that a future pope will feel differently.

Emma Von Zeipel
Emma Von Zeipel is a staff writer at Law Street Media. She is originally from one of the islands of Stockholm, Sweden. After working for Democratic Voice of Burma in Thailand, she ended up in New York City. She has a BA in journalism from Stockholm University and is passionate about human rights, good books, horses, and European chocolate. Contact Emma at EVonZeipel@LawStreetMedia.com.
Share:
Related ItemsCatholicCatholic ChurchChurchFemale PriestsGender EqualityLutheran ChurchPopePope FrancisSweden