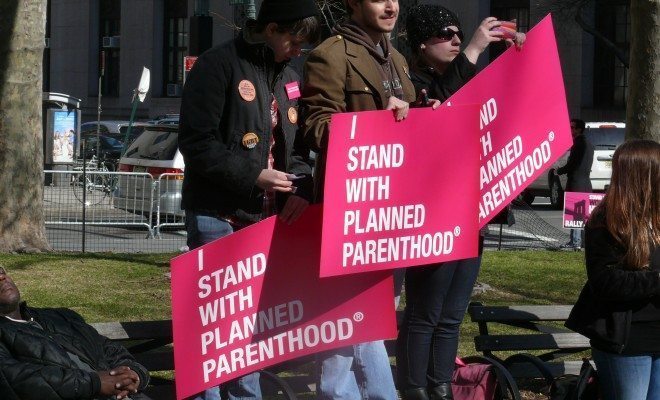 “No more baby parts.” That is what Robert Lewis Dear, the gunman who killed three people and injured several more at a Planned Parenthood in Colorado, allegedly told authorities following his arrest. We can assume that the shooter was referring to the smear campaign of videos released earlier this year by the Center for Medical Progress. These videos have been analyzed multiple times and have been proven to be doctored, falsely claiming that Planned Parenthood sells parts from aborted fetuses for profit.

Planned Parenthood does not sell baby parts. So why did Dear say “no more baby parts”? That is simple: because the slanderous and hateful rhetoric surrounding those videos continued even after they were proven to be fake, and those fake facts were repeated over and over again by the media and by politicians seeking an emotional reaction from their audience and to bolster their numbers. They are by no means to blame for the tragedy that occurred in Colorado, at least not directly. But politicians do–especially those candidates running for president–need to hold themselves accountable for spreading lies.

It is no secret that politicians stretch and manipulate facts to suit their own agendas, but at some point manipulation turns into outright falsehood. The citizens supporting these candidates, though, don’t know that, and are unlikely to research the facts on their own when they are listening to someone they trust. This is great for people making a living from fact-checking debates, but very bad for the future of American policy.

After the shooting in Colorado, Democratic candidates took to social media immediately to show their support for Planned Parenthood.

We proudly #StandWithPP of Colorado Springs and the brave law enforcement personnel who fought to protect it.

My thoughts and prayers are with those in Colorado. #StandWithPP

Meanwhile, Republican candidates stayed relatively quiet. Who can blame them, really, when the place where yet another shooting happened was an organization they so vehemently denounce? A few of the GOP presidential candidates, such as Trump, Fiorina, and Huckabee, finally acknowledged the tragic event, but also turned it into an opportunity to mention, once again, the lie that Planned Parenthood sells fetal tissue.

In an interview with “Fox News Sunday,” Carly Fiorina was asked whether she thinks the violent rhetoric towards Planned Parenthood is to blame for actions like those in Colorado, to which she replied:

First, it is not alleged. Planned Parenthood acknowledged several weeks ago they would no longer take compensation for body parts, which sounds like an admission they were doing so. Secondly, this is so typical of the left to immediately demonize the messenger, because they don’t agree with the message…What I would say to anyone who tries to link this terrible tragedy to anyone who opposes abortion or opposes the sale of body parts is, this is typical left-wing tactics.

Here we see a prime example of fact manipulation, as well as blaming the opposition rather than taking responsibility for spreading lies. It would put Fiorina in an awkward position, of course, to contradict what she said in the CNN debate about the Planned Parenthood videos, which turned out to be incorrect. But is it better to hold tightly to false facts, rather than admit to your supporters that you were wrong? Only in a political career. It is extremely saddening to see that politicians, especially the politicians running for the highest office in the United States, are relying on such underhanded tactics to achieve their goal. It certainly does not bode well for us, the American citizens who have to put up with it.