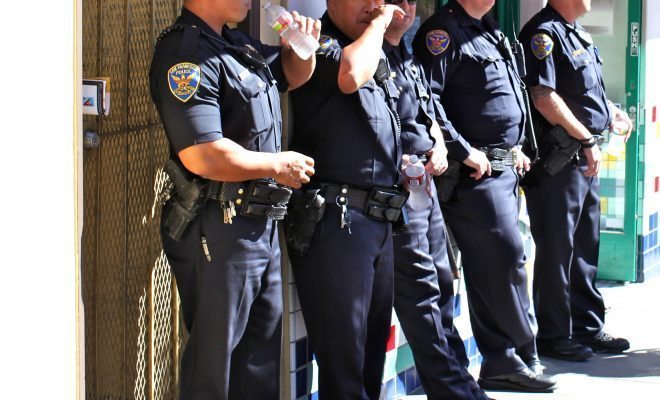 The state of Louisiana wants to ensure that Blue Lives Matter. Recently, Governor John Bel Edwards expanded Louisiana’s Hate Crime Law to encompass protections for police officers. The new law, House Bill 953, also known as the Blue Lives Matter Bill, passed the Republican-controlled House and Senate with 92 to 0 and 33 to 3 votes, respectively. Now in the state of Louisiana, it’s unlawful to target people based on their perceived race, age, gender,  religion, color, creed, disability, sexual orientation, national origin, ancestry of a person, or because of actual or perceived membership with, service in, or employment with law enforcement officer, firefighter, or emergency medical services personnel. While the Governor and State Representatives may have created the law under the pretense of protecting the people who protect us, in actuality it debases the previously established protected classes under the hate crime law, and fails to address issues of racism connected with police criticism.

All the other protected classes of hate crimes in Louisiana have one thing in common: immutable characteristics. People cannot remove themselves from the identity of their race, age, gender, religion, color, creed, disability, sexual orientation, national origin, or ancestry; nor should they be harassed or vilified for these characteristics. It is for this reason that these groups benefit from special protection under the law. Adding a vocation to the same category as these groups stretches the bounds and limits of who or what qualifies as a protected class.

One of the organizations in opposition to the Louisiana law because of its categorization of emergency personal as a protected class is the Anti-Defamation League (ADL). According to the South Central Regional office’s website, the league is committed to combating anti-Semitism, hatred, and bigotry by investigating and exposing extremism while advocating for civil rights, religious freedom, and diversity. In a press release, ADL states its concerns,

Expanding the characteristics included in bias crime laws may open the door to a myriad of other categories to be added and simultaneously dilute current hate crimes legislation.  This bill confuses the purpose of the Hate Crimes Act and weakens its impact by adding more categories of people, who are better protected under other laws.

Essentially, House Bill 953 weakens the established law at an unnecessary expense since law enforcement groups can be protected by other laws.

State Representative Lance Harris wrote the bill after the murder of white Texas Deputy Daren H. Goforth by an African American man named Shannon J. Miles. The Blue Lives Matter organization itself began as a campaign to rally behind police officers after the targeted murders of Officers Rafael Ramos and Wenjian Liu during the heat of criticism against police brutality in New York.

But there are misperceptions on both sides. What the assailants of Deputy Goforth, Officer Ramos, and Officer Liu failed to understand when they attacked the officers is that the system under which police officers work is racist and unjust, but not necessarily every police officer carries those qualities. What Louisiana’s new law misunderstands is the climate in which police officers are serving. People in uniform are not under attack, however their trusted relationships with their communities continue to crumble under the deeply entrenched racism in this country.

Quite bluntly, House Bill 953 distracts from the issues of racism felt by many communities when it comes to police injustice. Before Blue Lives Mattered, Black Lives Mattered. Despite the fact that real issues of racism and injustice continue to rise within multiple police precincts across the U.S., Louisiana chose to focus on the protection of a group of people with contested vulnerability and established protection. As state representatives lose sight of the real issues, we as a nation cannot.

Dorsey Hill
Dorsey is a member of Barnard College’s class of 2016 with a major in Urban Studies and concentration in Political Science. As a native of Chicago and resident of New York City, Dorsey loves to explore the multiple cultural facets of cities. She has a deep interest in social justice issue especially those relevant to urban environments. Contact Dorsey at Staff@LawStreetMedia.com.
Share:
Related ItemsBlack Lives MatterBlue Lives MatterBlue Lives Matter BillHate Crime LawLouisianaPolice