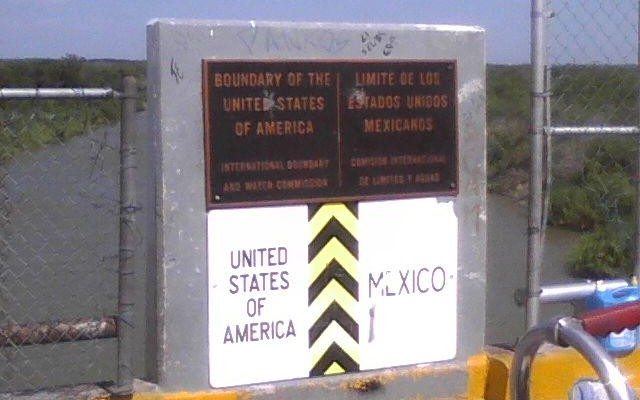 Obama, Perry, and the Crisis at the Texas Border

President Obama will be coming to Texas today. Yippee! Thankfully he doesn’t plan to come to Houston so I don’t have to worry about the traffic jam disasters he tends to create. We Houstonians have to deal with horrible traffic day in and day out so having that additional stress just makes us less friendly.

Let’s get to the more important stuff: President Obama, Governor Rick Perry, and immigration. So much has come out about these three in the last couple of days that it is making me mad.

But first I want to address the petty topic that Governor Perry has declined shaking President Obama’s hand when he hits the mean Texas tarmac. When I first read this headline I thought, “Oh great, something else for Democrats to grab on to and slander Texas and Republicans with,” but once I read the blurb that went along with that headline it actually makes sense. I love Governor Perry and although I don’t agree with him on everything, I do agree with him on not wanting to simply shake Obama’s hand and take a few pictures. Despite our differences you should always show respect to our Commander in Chief (until Texas secedes from the Union — though we all know that isn’t legal or likely). But if our good ol’ President is going to come to Texas he should probably squeeze in a little time to talk to the Governor and see what’s going on at the border instead of hitting up Democratic party circuit. Squeeze in reality for a few hours sir, you might look like you care about what’s happening down here.

Moving on to something a bit closer to home and a little more important: a Houston Independent School District (HISD) middle school is being considered as housing for immigrant children. I am the product of a HISD education — a craptastic one at that — and my intelligence and creativity come from hard work and influences outside of the HISD realm, but I still feel it is necessary to share that tiny bit of information. HISD is the largest school district in Texas, seventh largest in the United States, and it has 282 schools. Yes nearly three hundred schools, but how many of those are actually in use?

HISD was so kind as to give Homeland Security officials a nice little tour of an abandoned middle school in the Houston area. Why would Homeland Security want to come visit an abandoned school, you ask? Well it’s because this building is being considered for housing for undocumented children who have crossed the Texas-Mexico border in recent months. Most of these kids crossed the border illegally and alone, which has now turned into another issue that the U.S. is being forced to handle. Typically Border Patrol is required to transfer all unaccompanied children over to the federal Office of Refugee Resettlement within 72 hours, but because so many children — 52,000 since October 2013 — have crossed the border it is taking more time and resources to house all of these illegal children. Surprisingly by law, all illegal alien children who are not from Mexico cannot be immediately deported without an additional investigation to ensure that these children are not victims of sex trafficking.

It was news to me to find out that Terrell Middle School, the site of the tour, had been closed since 2001 and is now simply a storage unit for the district. So instead of taking the hard-earned tax dollars of Houston locals and putting them into keeping Terrell as a school, people like Congresswoman Sheila Jackson Lee and the higher ups within HISD feel it is okay to turn it into a housing facility for children. I have never been a fan of Congresswoman Lee and certainly have very little respect for anyone at HISD, but this is getting a little bit ridiculous. Allowing an abandoned school to go unused is infuriating, but then to turn it into federal housing is even worse. Yes, these children need a place to stay but it is not the responsibility of a school district to house children and the federal government should probably get its act together and do what needs to be done. Terrell could be reopened had HISD used a little bit of a $1.9 BILLION bond to update it instead of just letting it sit there while they tear down and rebuild schools that really don’t need to be renovated or rebuilt altogether.

What else could the abandoned middle school be used for instead of just housing for immigrant children and storage for HISD? Well, the school could be torn down and the property sold to a private investor to create more housing or a shopping center for the area. Or even use the land as a sports arena. At the end of my neighborhood is a parcel of HISD property that is all baseball fields rented out to a local little league association for $1 a year. HISD doesn’t even care to profit from what it already owns. The building could be turned into a public library, police station, or even a community center. Allowing the 14.5 acres to be used in a way that is beneficial to the city of Houston is much more ideal than allowing it to be turned into storage or federal housing for undocumented children.

Everyone knows that getting anything done by the government is like watching paint dry. Slow and painful. And can I ask why President Obama declared back in June that we have an “urgent humanitarian situation” at our border? This is not something new; this has been going on for decades. Sometimes I wonder where the President has been all of these years. I’ve seen the statistics: there have been a larger number of border crossings in the last year but there is a reason for that. I partially blame how bad it is getting south of the border, but I also blame how relaxed we have become about our borders without even realizing it.

I may come across a bit heartless, but I don’t believe in a handout and I don’t believe that just because you cross the border into the United States that you are automatically allowed to live here, even if you are a child. There are laws and regulations that need to be upheld. The first step to becoming an American is to respect the United States.

Allison Dawson
Allison Dawson was born in Germany and raised in Mississippi and Texas. A graduate of Texas Tech University and Arizona State University, she’s currently dedicating her life to studying for the LSAT. Twitter junkie. Conservative. Get in touch with Allison at staff@LawStreetMedia.com.
Share:
Related ItemsBorderBorder PatrolChildrenHISDHomeland SecurityHoustonIllegal ImmigrationImmigrationObamaRick PerrySchoolSheila Jackson LeeTexas