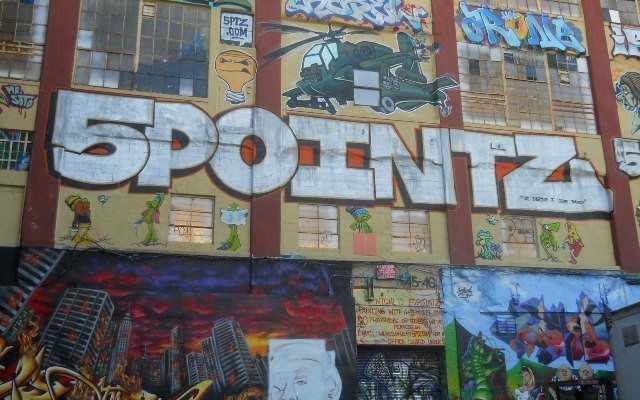 “Spray a square around the tag and then fill it in.”

This is a new anti-graffiti tactic described in the latest NYPD internal directive issued May 2, 2014. Police officers now carry black, red, and white aerosol spray paint with orders to photograph graffiti, then “box it out” and paint it over “in a professional manner.” According to the directive, officers should target “identifiable tags, not large murals” such as those produced legally by the Bushwick Collective in areas such as Williamsburg and Long Island City, where the internationally famous graffiti mecca 5 Pointz was recently white-washed by developers. Graffiti patrols are currently stalking Bushwick, Brownsville, and Bedford-Stuyvesant, and the policy will be under way in all five boroughs this summer. “It’s supposed to discredit their work,” an officer said to the New York Post, “and break their manhood.” The May 2 directive is only one part of a new anti-graffiti campaign, as Police Commissioner Bill Bratton alluded to on Wednesday while speaking to reporters. “The issue of graffiti is something we will be addressing more significantly…We can’t just keep doing the same old thing all over again,” said Bratton, rationalizing the new tactic. “We need find new ways to basically make the arrest.”

Commissioner Bratton, perhaps, misinterprets graffiti though, and in doing so, his re-ignition of the “Graffiti Wars” between artists and police will cost the city millions of dollars, not to mention destroy the lives of artists whose “crime” is victimless, while diverting valuable police resources in a city where shootings have spiked seven percent over the last year.

We should read graffiti instead as political statements; or as a response to the inequities of urban development, as criminologist Jeff Ferrell argued in his 1993 landmark study of the indigenous urban art form. Ferrel saw graffiti as an “anarchistic resistance to cultural domination, a streetwise counterpoint to the increasing authority of corporate advertisers and city governments over the environments of daily life.” Moreover, graffiti was a protest against the “aggressive disenfranchisement of city kids, poor folks, and people of color from the practice of everyday life; and finally, the careful and continuous centralization of political and economic authority.” Aesthetically, it attempts to break the “hegemonic hold of corporate/government style over the urban environment.” This interpretation of graffiti is quite convincing, especially considering the rampant gentrification of Brooklyn and Queens — indeed the very neighborhoods the NYPD has chosen to deploy its new campaign.

In order to understand the antagonism between graffiti artists and police today, however, we must revisit the genesis of contemporary graffiti in the hip hop movement during the 1960s in the South Bronx, and the evolution of the city’s response to graffiti developing as cultural and political force. During the mid-1960s — at the outset of urban crisis — graffiti taggers, or writers, began signing urban surfaces such as park benches, buildings, and subway trains with marks distinct to each artist. The practice grew through the 1970s as the marks became more elaborate. New York graffiti was subsequently met with strict public policy, and police directed anti-graffiti campaigns to eradicate graffiti from the urban environment, especially on subway trains where it was particularly noticeable. Mayor John Lindsay outlawed the sale of graffiti paraphernalia in 1972; Mayor Koch militarized train yards with razor wire and attack dogs in the early 1980s and  declared vandalism a felony, sentencing offenders to community service or jailing graffiti artists at Rikers Island. The “Graffiti Wars” between artists and police persisted till the 1990s when graffiti crime tapered under the Giuliani and Bloomberg administrations due to increased police enforcement of “quality of life offenses” such as the ubiquitous squeegee-men, and homelessness — a trend that paralleled the exponential gentrification of Manhattan and surrounding boroughs of the City.

If the NYPD’s May 2 directive is indicative of a new “Graffiti War,” as Bratton’s comments suggest, it will come at a great cost to the city. “This whole graffiti program is ridiculous,” one officer said. “Some of these neighborhoods are really dangerous. There should be more of a focus on serious crime.” A high-ranking officer commented to the New York Post: “Summer is right around the corner. Shootings always go up in the warmer months. This year is no exception. You can’t have officers wasting their time on graffiti taggers.” If one thing is clear from these statements, it’s that police are not happy with their new duties, and citizens should not be complacent either. The May 2 directive will divert police resources away from crime and problems that actually affect the city, and thus will cause more harm than good.

But much larger issues are at stake here. Instead of experimenting with new ways to eradicate graffiti, New York City government should spend more time addressing systemic problems that cause graffiti in the first place. If we accept Jeff Ferrel’s assertion that graffiti is a response to inequitable conditions of urban life, as I believe has been the case in New York since the 1980s, then the real problem facing the city today is not graffiti, but the structural inequities of urban development such as the alienation of lower-middle and working-class communities displaced from the rising cost of city living.

If graffiti is on the rise in New York, as Bratton would have us believe, then we should read this trend as a sign that something is terribly wrong. “We’ll be dealing with that graffiti as far as the vandalism aspect, the gangs or crews, if you will, use that to spread messages,” said Commissioner Bratton, “as a way to mark their territory.” This is a dated view of graffiti, based on unfounded analyses from the 1970s that border on racism. Do graffiti writers really “mark their territory,” as would a dog or a wild animal? Of course not. Perhaps the real problem at stake here is with the leadership of the NYPD, and the obsolete ideology that informs their tactics.

Ryan D. Purcell (@RyanDPurcell) holds an MA in American History from Rutgers University where he explored the intersection between hip hop graffiti writers and art collectives on the Lower East Side. His research is based on experience working with the Newark Public Arts Project and from tagging independently throughout New Jersey and New York.

Ryan Purcell
Ryan D. Purcell holds an MA in American History from Rutgers University where he explored the intersection between hip hop graffiti writers and art collectives on the Lower East Side. His research is based on experience working with the Newark Public Arts Project and from tagging independently throughout New Jersey and New York. Contact Ryan at staff@LawStreetMedia.com.
Share:
Related ItemsArtCommissioner Bill BrattonCrime in AmericaGraffitiGraffiti WarsNew YorkNYPDPolicyQuality of LifeVictimless Crime