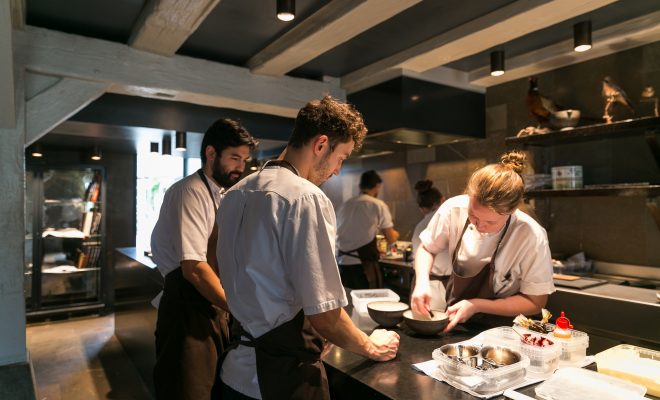 "Inside Noma's Kitchen" courtesy of City Foodsters; license: (CC BY 2.0)

In a time when anti-immigrant sentiments are spreading through the western world, we don’t often get hear about good news. But here’s some: Ali Sonko is a Gambian immigrant who spent 14 years working as a dishwasher in the Michelin-starred restaurant Noma in Copenhagen, and he was just named co-owner. He will take on new duties as a host and own stakes in the company; he will share 10 percent with two other managers. The star chef and co-owner René Redzepi owns about 20 percent and the rest is divided over four business partners. But Sonko says he will still spend time by the sink and wash plates, like he is used to. “I am so happy,” he said.

Redzepi said he had a special connection with Sonko, as he shares a first name with Redzepi’s father, who also was a Muslim immigrant–an Albanian born in Yugoslavia. He also worked as a dishwasher when he came to Denmark in the 1970s. Of Sonko, Redzepi said: “He has spent every hour of his life at that restaurant, works hard and hardly takes a day off. He is a great example of an immigrant done good.” The restaurant recently closed its original location and is rebranding itself as an urban farm. It plans to open again in December.

Sonko is 62, has 12 children, and used to be a farmer in Gambia. He fell in love with a Danish woman when on vacation in Denmark, and moved there 34 years ago. When asked about immigration in Denmark, he said, “Everybody does their best.”

Denmark, along with many other countries in Europe, has seen a rise in far-right ideology.  The right-wing Danish People’s Party has seen new success. In the middle of February, the party was criticized for handing out flyers with fake one-way tickets for immigrants to go “home,” to a destination that translates to “far away-istan.”

Denmark recently passed a law that requires immigrants to hand over any jewelry or expensive personal belongings as they enter the country, to help pay for their stay. Earlier this week, right-wing politician Inger Stojberg published an opinion piece in a newspaper in which she called a Syrian immigrant family “greedy” and accused them of abusing the Danish welfare system.

When the Noma staff traveled to Britain in 2010 to receive a prize for being the world’s best restaurant, Sonko couldn’t join the team since he couldn’t go to Britain without a visa, despite having lived in Denmark for 34 years. So to show their appreciation of him, everyone from the restaurant wore a t-shirt with his portrait during the ceremony. And by the time Noma received that prize for the third time in 2012, Sonko could come along.

“Ali is the heart and soul of Noma. I don’t think people appreciate what it means to have a person like Ali in the house. He is all smiles, no matter how his 12 children fare,” Redzepi said in a recent speech to his staff.

Emma Von Zeipel
Emma Von Zeipel is a staff writer at Law Street Media. She is originally from one of the islands of Stockholm, Sweden. After working for Democratic Voice of Burma in Thailand, she ended up in New York City. She has a BA in journalism from Stockholm University and is passionate about human rights, good books, horses, and European chocolate. Contact Emma at EVonZeipel@LawStreetMedia.com.
Share:
Related ItemsdenmarkGambiaImmigrantsImmigrationNomaRestaurantRight Wing