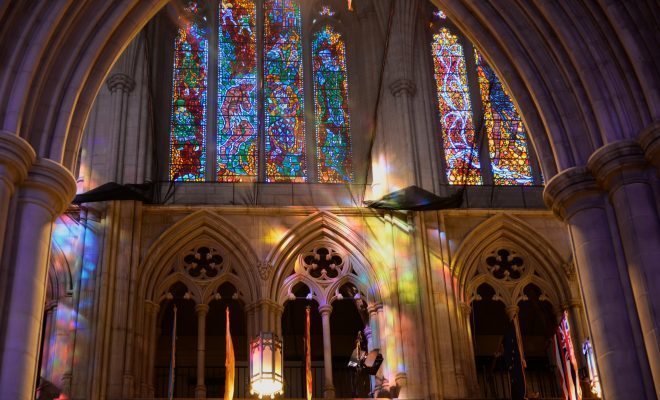 National Cathedral Debates the Future of its Confederate Flag Iconography

The National Cathedral in Washington D.C. is the latest institution to join the conversation about how to handle its ties with the Confederate flag. Two images of the Confederate flag are featured on its stained-glassed windows, and have been there for nearly 60 years, but discussions on what the church is going to do about them only began a few months ago. The church announced Wednesday that the Confederate flags would be removed, but the timeline concerning their removal and other details of the operation are still a little foggy.

The stained-glass windows commemorate General Stonewall Jackson and General Robert E. Lee of the Confederate Army, and were installed in 1953, almost a century after the Civil War ended. They were at least partially funded by the Daughters of the Confederacy and a private donor from the North, and according to interim dean of the cathedral Mariann Budde, the images represented “the way the Civil War memory was encoded in American history in the 20th century.”

Despite all of the time church officials spend in the cathedral, none of them noticed it until after the Charleston shooting last summer. “That’s when it resurfaced in our consciousness that the Confederate flag was part of our stained-glass artistry,” Budde said.

The previous dean of the cathedral, Rev. Gary Hall, ordered that the windows be taken down. Exactly when the stained-glass windows will be removed is unclear, but Budde confirmed that the Confederate flags will be removed and replaced with plain glass, “as soon as we can do it,” which should not be longer than a few weeks, she said. However, church leadership are not the only ones with the power to decide how to move forward. The cathedral is hosting a series of public forums and events dealing with racism, slavery, and racial reconciliation to get other input and perspectives.

“The Lee-Jackson windows call the question of race and the legacy of slavery, and instead of turning away from that question, the cathedral has decided to lean into it,” said the Rev. Dr. Kelly Brown Douglas, the cathedral’s canon theologian. “Instead of simply taking the windows down and going on with business as usual, the cathedral recognizes that, for now, they provide an opportunity for us to begin to write a new narrative on race and racial justice at the cathedral and perhaps for our nation.”

The cathedral’s announcement to remove and replace the Confederate flags from the stained-glass windows is the most recent in a string of Confederate-related controversy around the country. On Tuesday, Mississippians protested for the removal of the Confederate icon from their state flag. Georgetown is struggling with how to deal with selling 272 slaves to bolster its finances more than a century ago, and last year, South Carolina removed the Confederate flag from the grounds of the Statehouse.

A task force dedicated to examining the status of the Confederate flag on the stained-glass window was assembled a few months ago, and has since recommended that the cathedral also conduct an audit of all the art and iconography on its premises. “Whatever the Chapter’s final decision, ultimately, the windows will not live in the cathedral in the same way they have in the past,” the task force said.

The public forums will begin Sunday, July 17 at 4 p.m. with a panel discussion titled “What the White Church Must Do.”

Inez Nicholson
Inez is an editorial intern at Law Street from Raleigh, NC. She will be a junior at North Carolina State University and is studying political science and communication media. When she’s not in the newsroom, you can find her in the weight room. Contact Inez at INicholson@LawStreetMedia.com.
Share:
Related ItemsConfederacyConfederate FlagNational CathedralRobert E. LeeStonewall Jackson