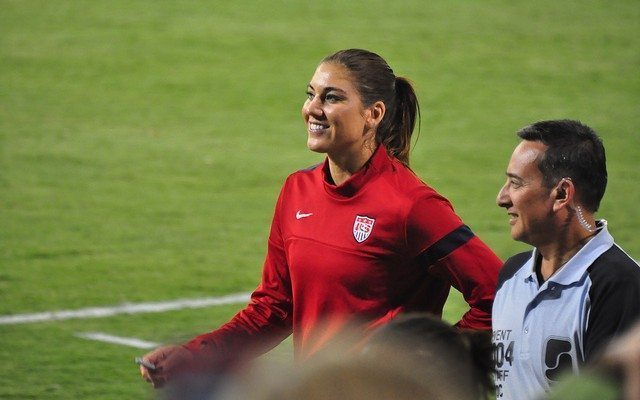 Men Aren’t the Only Superstar Athletes Charged with Domestic Violence

I was trying really hard to keep my opinion to myself when it came to the Ray Rice, Adrian Peterson, and Jonathan Dwyer domestic violence cases, but I just can’t anymore.

Last night I watched as many different male commentators shared their opinions on ESPN about all things domestic violence and what the NFL should do, and then I read an article this morning that has irritated me beyond belief. Female Soccer star Hope Solo was arrested and charged with domestic violence back in June but there is little coverage of the story. The only news I found about her recently is that she set a new “record while awaiting domestic violence trial.” So Hope gets to live her life, play the sport that she loves, and silently await trial for not only causing injury to a child but also to her sister. Now reports say that she was drunk at the time, which is no excuse! No matter if you are sober, drunk, or have some crazy sleep disorder that causes you to hit someone you should not be left on a pedestal while others are ostracized for causing bodily harm to others as well.

I do not support domestic violence and I certainly have a problem with any woman who states “I don’t believe in domestic violence, but I will say: any woman who can hit a man, a man shouldn’t have to sit there and take the abuse. The abuse goes both ways.” This Ray Rice fan, only identified as Kathy, is out of her mind! No one needs to be laying a hand on anyone in a violent manner. Ever. Both men and women should be able to exercise restraint, you are adults!

So while Ray Rice is now an ex-NFL player, Adrian Peterson is on the NFL’s “exempt” list (what is that, like Santa’s naughty and nice list?), and who knows what will happen to Jonathan Dwyer, little miss Hope Solo was able to apologize to the public and go back to work. How is this fair? After all these years of women wanting to be treated as equals we go and do this. We allow a woman to hit not one but two people, apologize, and then go back to work and be praised for a 72nd shutout game with her national team?

Men can’t hit women or children, but apparently women can hit men, women, and children while still being able to go about their lives without being judged by the public and no actions are taken from the league she works for? Yes, her charges seem to be misdemeanors but an arrest and a trial, that is enough for me to feel the need to ostracize her and state that she should have been yanked from the league until her trial was over and resolved.

We do things differently in the south. We were all raised on the idea of getting a spanking. In fact, there may have been a time or two where my Mississippi grandmother would order me outside to the weeping willow tree to grab a switch because I had done something wrong. In all honesty I don’t remember if I ever got a whipping but the threat of it and making me pick out my switch was enough to make me not act up again. I also had a father who was a true military man through and through. I would have to say, in my eyes, my dad was a mix of John Wayne and General Patton. All he ever had to do was give a look and I knew not to do what I was about to do. That is the kind of fear we need to instill in our children today. We shouldn’t coddle them, but we also shouldn’t have to actually harm them, that fear is enough. (For me at least, until I got into my teenage years, but that’s a different story.) I love my dad but even to this day he could scare me to death with that look.

Hope needs a reality check. You don’t get to hit people — even if you’re drunk — and still have a career that influences young women all over the world. Many claim that Rice, Peterson, and Dwyer were role models to children. So is Hope. Maybe, as a parent, you should want your child’s role model to be someone in the community and not a celebrity.

Can we also remember that domestic violence is NOT just violence against women! Women beat their husbands and children, too. We can’t spend weeks talking about the male athletes charged with domestic violence like Rice, Peterson, and Dwyer without acknowledging Solo. It’s sexist and full of exclusion.