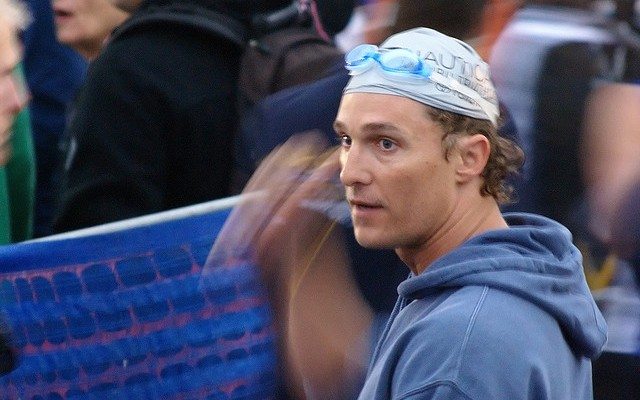 Matthew McConaughey Is Narcissistic at the Oscars, Becomes Conservative Hero

Loves, how many of you watched the Oscars on Sunday night?

I did, after a fair amount of effort finagling a live-stream feed onto my TV. Thanks for the complication, Time Warner!

Anyway, if you stayed up to watch the end — or if you’ve been on the internet in the last 48 hours — you’ll know that Matthew McConaughey won Best Actor. Moment of silence for Leonardo DiCaprio, who’s having nightmares right now.

This what Leonardo DiCaprio’s nightmares look like #Oscars pic.twitter.com/yhkAkgDxSP

“First off,” said McConaughey, “I want to thank God, because that’s who I look up to. He has graced my life with opportunities that I know are not of my hand or of any other human hand. He has shown me that it’s a scientific fact that gratitude reciprocates … When you’ve got God, you’ve got a friend, and that friend is you.”

D’aw. Conservatives are drooling over this show of Christian religiosity. Please note, no one gave half a shit about the other three God-thankers in recent Oscar history — because none of them were white, Texas boys with a charming Southern drawl.

Anyway! Here’s what the conserva-turds have to say about Matthew’s Godly mention.

Silence a Hollywood liberal: Give thanks to God. http://t.co/FYOMiCoQFg

And of course, not to be left out, Fox News chimed in with an unusually straight-news style headline: “Matthew McConaughey one of few to thank God in Oscar acceptance speech.”

Folks, the conservative Right’s excitement over McConaughey’s God speech is interesting for a few reasons.

First of all — holy racism, Batman. I mentioned that there were three other Oscar winners who thanked God in their acceptance speeches in recent years. Those actors are Denzel Washington, Jennifer Hudson, and Forrest Whitaker. They’re all Black. And no conservative pundits cared even a little, tiny bit, when they mentioned God on Oscar night.

Some would argue that’s because African-Americans are statistically more likely to be devout Christians. When stereotypes abound about church-going, Gospel-singing Black folk, who’s really surprised when Black actors start talking about God? Clearly, no one.

But I’d say that’s not the real reason conservatives are so much more excited about Matthew McConaughey’s Godliness than Jennifer Hudson’s. What’s actually going on here?

Conservatives see Matthew McConaughey as one of them. And they’re all kinds of pumped that someone on their team is a visible member of the Hollywood glitterati.

After all, McConaughey’s wearing the uniform. He’s white, straight, cis-gendered, and charmingly Southern. He’d fit right in if he headed back to the Bible Belt—he’s even related to a Confederate soldier. He’s a perfect poster boy.

But it goes deeper than that. The most important aspect of McConaughey’s conservative appeal is his narcissism.

After he finished thanking God, Matthew launched into a weird diatribe about how he’s his own hero. It was kind of bizarre, and if you try really hard, you can squeeze some inspirational juice out of it along the lines of, “You’re your own toughest competition, be the best you can be!”

Except you’d have to try really, really hard. The clearest takeaway here is that Matthew McConaughey is really obsessed with himself. And he kind of always has been. Remember when he got married, and all he could talk about was how lucky his wife was to have him as her Prince Charming? Barf.

Conservatives are notorious for their narcissism. That’s exactly the trait that allows them to vilify poor people, single mothers, women, and abortion providers. It’s how they came up with that term, “personal responsibility,” and used it to dismantle the social safety net. It’s the reasoning behind their destructive opposition to basic human needs, like universal healthcare, affordable housing, and nutritious food.

Conservatives are conservative because their politics lack empathy. They’re unable to put themselves into someone else’s shoes. It’s easy to fight for a ban on abortion when you’ve never been faced with an unwanted pregnancy. It’s even easier to claim that universal healthcare is communism when you’ve never been denied access to medical care because of your inability to cough up the cash.

It’s fairly common for conservatives to switch teams when they’re faced with shitty situations. Take this guy for example, who worked on the McCain-Palin ticket in 2008. He went from a Republican staffer to an Obamacare activist — after he was diagnosed with cancer and denied health insurance.

Republicans often can’t see the harm their policies cause until they’re in the middle of their own self-inflicted crosshairs. Even then, if they switch teams, it’s primarily for self-preservation. Right-wing politics is all about narcissistic self-interest. I do not like this, their policies scream like a toddler throwing a tantrum. And it’s imperative that I get what I want.

This pretty much sums up Right-wing politics.

So, it makes sense for people like Michelle Malkin and Rick Perry to be excited about Matthew McConaughey’s Oscar speech. God talk aside, it was about as narcissistic as you can get. And that resonates with conservatives.

So, while your Internet is blowing up about the Godliness of McConaughey, please remember that his speech wasn’t reflective of Christian values like peace and charity. It’s no coincidence that conservatives are excited about it.