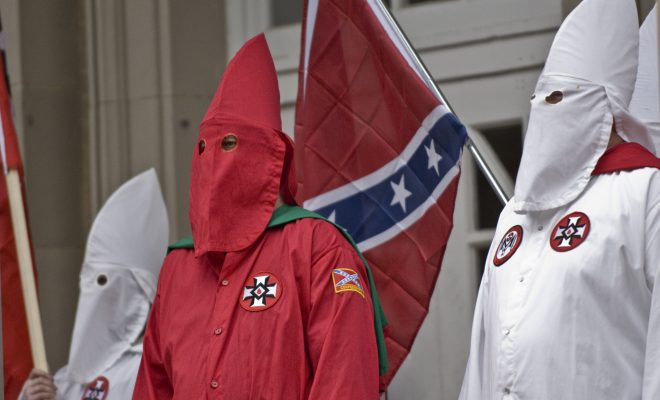 The residents of Texas City in Galveston, Texas received an unwelcome gift this Memorial Day: plastic bags with fishing weights, candy, and KKK recruitment flyers that were left on their lawns, apparently thrown from a vehicle driving past on Monday night.

Seventeen different homes received the bags, which contained two versions of KKK flyers, one reading “Say No to Cultural Genocide” and the other saying “Join the Best or Die Like the Rest.”  Local police have labeled the plastic bags a criminal matter, so whoever distributed the bags may face criminal charges if they are caught. At this point the police do not yet have a suspect.

The phone number listed on the flyers is not in service, no witnesses have come forward, and there seem to be no leads in the case, unless anonymous tipsters can provide new information. Many residents of Texas City were shocked by the flyers, stating that they typically consider their community to be a diverse and tolerant place, but Ashton Woods, co-founder of Black Lives Matter Houston, called the flyers “not surprising.”

The plastic bags are jarring and disturbing to the residents of Texas City but Woods is correct in citing them as part of larger trend. Earlier this month, flyers reading “around blacks never relax” were circulated on the University of Texas at Austin campus on the heels of a series of flyers targeting Chinese students that were posted in the university’s engineering department. In April, flyers urging white Americans to report illegal aliens with the slogan “America is a white nation” were posted throughout the University of Texas at Arlington campus. In February, the white nationalist group American Vanguard posted flyers at several Texas colleges urging white men to “take your country back.” Immediately after the November election, flyers calling for “vigilante squads” to arrest and torture those who support diversity were posted around the Texas State University campus.

It would seem that each series of flyers emboldened copycats to try their hand at attacking a new group. Hate groups have launched an estimated 17 recruitment campaigns on Texas university campuses since September. In the Anti-Defamation League’s Southwest Region, which stretches from El Paso to Orange, anti-Semitic incidents have spiked by more than a third this year. After a week in which two nooses were found inside the African American history museum and the home of Lebron James was spray painted with a racist slur, the Memorial Day flyers in Texas City feel like par for the course. It is comforting to see that at least all three of this week’s cases are being investigated as serious threats rather than being written off as “harmless” pranks–but the Texas City flyers are part of a larger pattern that needs to be taken seriously before leaving flyers on people’s lawns escalates.

Jillian Sequeira
Jillian Sequeira was a member of the College of William and Mary Class of 2016, with a double major in Government and Italian. When she’s not blogging, she’s photographing graffiti around the world and worshiping at the altar of Elon Musk and all things Tesla. Contact Jillian at Staff@LawStreetMedia.com
Share:
Related ItemsKKKKu Klux KlanMemorial DayRacismTexasTexas CityWhite Supremacy