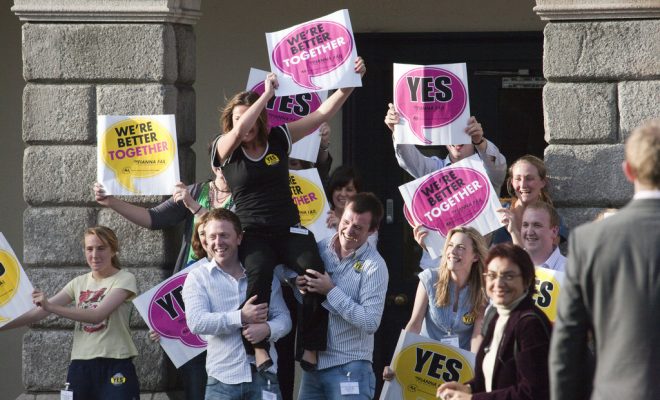 Two women departed from the Dublin Airport at 6:30 in the morning on Saturday. They arrived in Manchester, England, and immediately commuted to an abortion clinic. The women live-tweeted their journey from the account @TwoWomenTravel. The abortion-seeking woman–accompanied by her friend–was one of thousands of Irish women each year who leave their home country each year in hopes of getting the procedure elsewhere. Most commonly, that elsewhere is Wales or England. Abortions are illegal in Ireland, with an exception for cases where the mother faces immediate death.

According to the pair’s final tweet, their purpose for live-tweeting the journey was as follows: “We wanted to show the very ordinariness of the situation-we wanted to show it for what it is; a series of waiting rooms, moments in transit, a sequence of tediums protracted by stigma. No filters, no monologues, just the facts.”

Her abortion was successful–though not after getting turned away from one over-crowded clinic–but the discomfort of journeying away from home for an otherwise routine procedure that is unrestricted in many countries around the world, especially in Europe and the West, was poignant. Since 1983, Ireland–a heavily Catholic country–has outlawed abortions via its constitution’s Eighth Amendment. In 2012, after a woman died when doctors refused her the procedure, an exception was made to the Eight Amendment for women whose lives were in immediate danger.

All others, like the two that flew to England over the weekend, must travel abroad to legally procure an abortion. Those who illegally undergo the procedure in Ireland face up to 14 years in prison. Amnesty International, a human rights organization, deems Ireland’s abortion law as “one of the world’s most discriminatory and punitive.”

Not the first or the last bleeding women about to face a long treck home @EndaKennyTD #twowomentravel pic.twitter.com/08q2CQE3Yw

Enda Kenny, Ireland’s prime minister, has remained silent on his country’s abortion law, which many have been protesting and demanding a referendum to repeal the amendment. Not everybody was happy about the two women live-tweeting their trip to England. Cora Sherlock, the spokeswoman for Pro Life Campaign Ireland, sent out a tweet on Saturday that said: “It is deeply disturbing that the ending of the life of an innocent, vulnerable human being is being live-tweeted today. Very sad.”

But Simon Harris, the Irish government’s minister for health, took to Twitter to thank @TwoWomenTravel for  “telling story of reality which faces many.”

Alec Siegel
Alec Siegel is a staff writer at Law Street Media. When he’s not working at Law Street he’s either cooking a mediocre tofu dish or enjoying a run in the woods. His passions include: gooey chocolate chips, black coffee, mountains, the Animal Kingdom in general, and John Lennon. Baklava is his achilles heel. Contact Alec at ASiegel@LawStreetMedia.com.
Share:
Related ItemsAbortionAbortion RightsAmnesty InternationalEnda KennyIrelandTwoWomenTravel