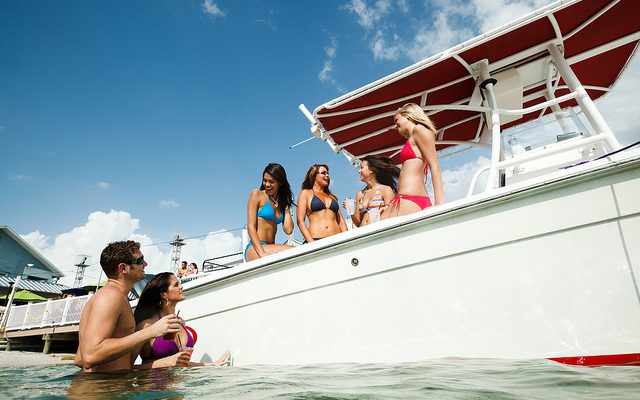 For American college students, spring break is a time-honored tradition, typically synonymous with beaches, binge drinking, and…bad life decisions. However, this year a group of spring breakers vacationing in Cancun managed to also add bigotry to that alliterative list.

On March 3, a group of college students burst into a “Build that wall!” chant during a family show on a Cancun tourist cruise, to the astonishment of nearby honeymooners.

According to the Yucatan Times, Peruvian Anaximandro Amable Burga was aboard the “pirate ship” with his wife Suly, when he witnessed the xenophobic display. Bruga recounted the incident in a public Facebook post writing:

Today I was with Suly, my wife (who is a native of Mexico), watching an entertainment show off the coast of Cancun aboard a boat, and at the end of the show, a flock of Americans (maybe under the influence of alcohol, or maybe not), began to sing the infamous “Build that wall” chant louder and louder.

A few people reportedly expressed their annoyance, but the “Americans did not stop” and continued singing the “racist hymn.”

Bruga’s statement also called upon his fellow Latin Americans to defend one another from similar attacks, as reported by The Huffington Post and translated by Google Translate:

Latin Americans: We cannot be tolerant or even less mediators or flexible with these kinds of harmful attitudes, just like we can’t be tolerant with lies or with attacks against a person’s or a people’s dignity. No one told me about it: I lived it and it hurt and it bothered me and it filled me with rage, sadness and impotence.

Latin Americans: When you see a brother being insulted or beaten, don’t support the perpetrator, don’t join his beating by making fun of him, or insulting him or creating memes. Defend him because they are literally also insulting you. Feel it. We share the same story.

People couldn’t help but point out the obvious irony of privileged Americans showing support for Donald Trump’s plan to build a wall to keep Mexicans from entering America, while they themselves were visiting Mexico.

white people never cease to amaze me with their stupidity lol pic.twitter.com/LBjY4A2efD

This month, we saw a rise in drugs and rapists crossing the U.S.-Mexico border.
Must be spring break.https://t.co/ezBHfKlLmg

Unfortunately, the spring break complaints don’t end there. American spring breakers in Mexico have also been accused of trashing beaches and being rude to locals. While these tourism officials are likely used to seasonal drunk and disorderly behavior from college students, the political outbursts are new and can probably be traced back to the new Trump Administration. It will be interesting to see if America’s tourism relationship with Mexico begins to change thanks to President Trump’s border policies.

Alexis Evans
Alexis Evans is an Assistant Editor at Law Street and a Buckeye State native. She has a Bachelor’s Degree in Journalism and a minor in Business from Ohio University. Contact Alexis at aevans@LawStreetMedia.com.
Share:
Related ItemsCancunDonald TrumpMexicoMexico Border WallSpring Break