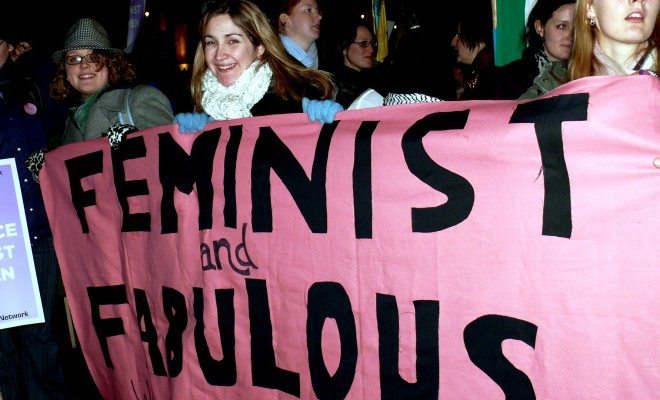 How Can You Be a Feminist If You’re Married?

As a liberal, opinionated, and feminist woman, living in the conservative South can sometimes be interesting. Just the other day I was having coffee with a new acquaintance and the subject of feminism came up. She asked me: “How can you be a feminist if you’re married?”

Surprisingly–or maybe it’s not so surprising–she is not the only person who thinks calling yourself “feminist” comes with restrictions; that it means if you’re married to a man you couldn’t possibly be a feminist because feminists hate men.

Along with the upsurge of men and women claiming the title “feminist” there has also been an increase of women and men speaking out against what they think feminism stands for. Take for instance this Tumblr account dedicated to women who think they don’t need feminism. Add that to the female celebrities who denounce feminism without really knowing what it means, and the misogynists on sites like 4chan and 9gag who think embarrassing feminists will stop them, and we have a real problem.

Now, it is not necessarily their fault that they aren’t aware of what feminism truly is. We have been brought up in a society where feminism has a negative connotation. The first thing that pops into most people’s heads when they think of “the F word” is man-hating women setting fire to their bras. That picture is then projected onto all feminists, and they are made out to be women who hate men and who want to oppress them.

This skewed view of feminism is not only wrong, it is dangerous.

What people need to understand is that, while there are misandrist (man-hating) feminists, not all feminists are misandrists. There are extremists in every group, and the unfortunate part is they are often the most vocal, and therefore, the most noticed.

Feminism’s basic definition is the belief that men and women should have social, political, and economic equality. That’s it. Feminism is the reason women can wear pants, hold jobs, and vote. It’s the reason single mothers can win custody of their children, and why women can hold public office. Feminism is responsible for so much of women’s freedoms today.

These are issues that are not magically going to go away, and while women have made social, political, and economic progress, we are far from achieving equality. Feminism’s ultimate goal is to give women the opportunity to be who and what they want, without being held back or judged because of their gender. Whether we want to be a CEO of a large company, a senator, a stay-at-home mom, a priest, a stripper, an entrepreneur, or anything else we could possibly think of, we should have the option. This is why feminism exists, and this is why all women need it, whether we think we do or not.

Feminism is not misandry, and it’s high time society understood that. I am a feminist. I am also happily married to a man, and I like wearing dresses and I like putting on make up. I want equal rights for women, so that all women can marry whoever they choose, or not get married, or dress in 7-inch heels or cowboy boots–so that all women can do whatever they want.

Morgan McMurray
Morgan McMurray is an editor and gender equality blogger based in Seattle, Washington. A 2013 graduate of Iowa State University, she has a Bachelor of Arts in English, Journalism, and International Studies. She spends her free time writing, reading, teaching dance classes, and binge-watching Netflix. Contact Morgan at staff@LawStreetMedia.com.
Share:
Related Items4Chan9gagEqualityFeminismFeministMarriageMisandryMisogyny