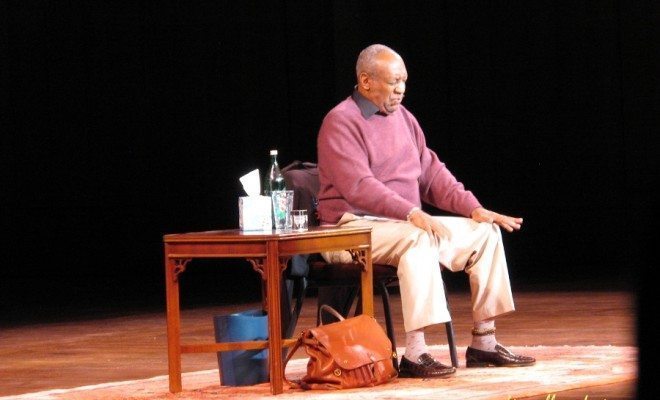 Bill Cosby has, to many, gained the sort of “elder statesman” distinction in the acting world. For all intents and purposes, things were going well for him this year. He signed up to do a new show on NBC and announced a Netflix standup special. Then a comedian named Hannibal Buress did a bit in which he accused Cosby of being a rapist.

Buress was of course not the first person to accuse Cosby of rape. In fact, many of his alleged victims had come forward over the years, starting roughly a decade ago. But because of Cosby’s celebrity status, the allegations had never really stuck. Buress’ point in the video is dead right–many people continue to defend Cosby because of his role in American consciousness as “America’s dad,” or just think that the many, many young women who have come forward with rape allegations are looking for their 15 minutes of fame. In fact, it took another man–Buress–repeating those allegations to even make it into national news.

That’s really just the tip of the iceberg. More and more women are coming forward with their stories–and they all sound pretty similar. Similar enough to make it clear that Cosby used the same M.O. with these women.

These women are finally widely getting support…mostly. Of course, this is America, so we still have a nicely cultivated culture of treating rape victims like shit. I found all of the tweets below by searching “Cosby” on Twitter. It only took me about five minutes. This is why women don’t go forward, and why it’s so essential to stand by the women who have. Because when you come forward you become a walking target for all of this.

Mr. Kincannon, doing drugs does not mean you consent to sexual activity. Furthermore, there is significant evidence that Cosby roofied or drugged at least some of these women. A man who doesn’t want to type out the word “vagina” shouldn’t be commenting on matters that require maturity and thoughtfulness, anyway.

I don't believe Bill Cosby'd rape anyone. My hunch is these women are trying to link their names w/ a consistently successful entertainer.

Most of Bill Cosby's victims refuse to even go to the press, please tell me how all these women are just lying for fame?

That’s why so many people have gotten famous through rape allegations. Really, it’s pretty much the way to get discovered now, along with America’s Got Talent and posting videos on YouTube. Never mind that some of these women–such as Janice Dickinson–are pretty well-known and wealthy in their own rights.

There have been a whole bunch of speculative pieces written about how we’ve all been able to ignore these rape allegations for so long. The most convincing argument I’ve heard is that Cosby isn’t the first powerful man, the first powerful cultural figure to face a case like this. Woody Allen and Jerry Sandusky are both good examples. People ignore the allegations out of a mixture of distrust of the victims and respect for the accused.

For those of you who still don’t believe that rape culture exists, well that’s it right there. Rape culture is a well-respected man being given a pass because it’s inconvenient and upsetting to take his 15-plus victims seriously.

Now, Netflix has postponed the standup special, NBC has cancelled the possible sitcom project, and TV Land has stopped showing reruns of the Cosby show. They probably shouldn’t be applauded too much–I highly doubt that any of the networks are doing this because they are convinced that Cosby is a rapist, but rather because they don’t want the bad publicity. And that’s one more good example of rape culture right there–when a woman comes forward with her story of being sexually assaulted, she’s accused of doing it for publicity’s sake; when networks pull the projects of rapists, they get applause.

Things are getting better in the United States. Our attitudes toward rape and sexual assault are changing, bit by incremental bit. But rape culture is still alive and well–just ask Bill Cosby.