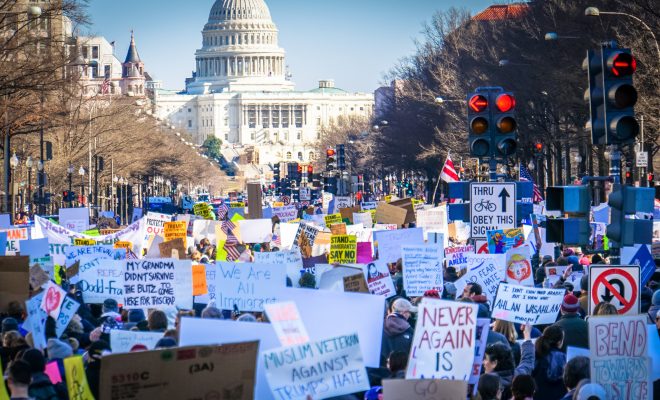 The number of hate groups in the U.S. in 2016 doubled for the second consecutive year, reaching an almost historic high, according to the Southern Poverty Law Center’s annual census of hate groups and other extremist organizations. The SPLC points to Donald Trump’s rise to power as the main culprit.

“Trump’s run for office electrified the radical right, which saw in him a champion of the idea that America is fundamentally a white man’s country,” said the SPLC.

Trump’s way of talking about immigrants; the selection of openly racist, anti-LGBT, and anti-Muslim appointees for his cabinet; the tweeting of inaccurate facts; and his threats to ban Muslim immigration are all contributing factors, says the SPLC.

According to the nonprofit civil rights organization, the radical right was more successful in entering the political mainstream last year than it has been in almost 50 years. In 2016 there were 917 documented hate groups, which is only about 100 fewer than the all-time high of 1,018 that was recorded in 2011. Unsurprisingly, most of the hate groups created were specifically anti-Muslim–from 34 in 2015 to 101 last year, a 197 percent increase.

The most dramatic growth in the number of hate groups was the near-tripling of anti-Muslim hate groups: from 34 in 2015 to 101 last year pic.twitter.com/4NKwfbHW3h

Immediately after the election there was also a surge in hate crimes; 1,094 incidents were reported in the first 34 days of the Trump Administration. Approximately 37 percent of those incidents directly referenced either Donald Trump, his campaign slogans, or his remarks about sexual assault. Noticeably, the largest share of Trump-related incidents by far were anti-woman at 82 percent.

Heidi Beirich, director of the SPLC’s Intelligence Project, told NBC News that hate groups have been on a steady rise since 2014. According to Beirich, it’s easy nowadays to find the groups thanks to the internet, and the fact that they want to spread their message.

On the topic of Trump’s immigration ban, Ibrahim Hooper, national communications director for the Council on American-Islamic Relations (CAIR) said, “What used to be a fringe, extremist ideology of anti-Muslim ideology has now moved from the fringe of society to the center of powers in the White House.”

“With a president whose policies reflect the values of white nationalists, extremists think they finally have a voice in the White House” pic.twitter.com/Sm1IrZTDXO

The survey also found that schools were also negatively affected by the campaign. After the election, the group’s researchers interviewed 10,000 educators and found that eighty percent said they had noticed more fear and anxiety among their students, particularly immigrants, Muslims, and African Americans. Many teachers reported that students used slurs, derogatory language and extremist symbols in school as well.

Only time will tell what the long term effects of Trump’s politics and presidency will be, but the short term ones are already proving to be quite scary.

Emma Von Zeipel
Emma Von Zeipel is a staff writer at Law Street Media. She is originally from one of the islands of Stockholm, Sweden. After working for Democratic Voice of Burma in Thailand, she ended up in New York City. She has a BA in journalism from Stockholm University and is passionate about human rights, good books, horses, and European chocolate. Contact Emma at EVonZeipel@LawStreetMedia.com.
Share:
Related ItemsAnti-LGBTAnti-MuslimAnti-WomenDonald TrumpHateHate CrimesHate GroupsRacismSouthern Poverty Law CenterSPLC