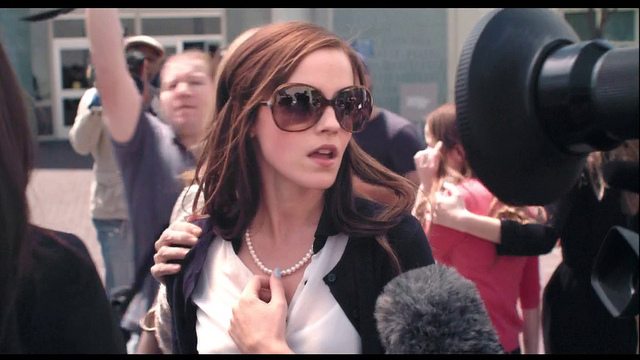 On Sunday September 21, a recently appointed UN ambassador gave a speech on gender equality that received a standing ovation. That ambassador was Emma Watson, the 24-year-old woman most know for playing Hermione Granger in the Harry Potter films. Her topic was feminism and a campaign the UN is launching called “HeForShe,” which Watson will spearhead. You can watch the entire speech below.

Since Sunday, Watson’s speech has gone viral, garnering support both for her cause and for feminism itself. I was especially pleased to see one of my own Facebook friends share the video with the caption: “Worth the watch, for both men and women! Gave me a whole new perspective on the word ‘feminist’.”

Good! That was the point. Watson shares not only the true definition of feminism, but says that thinking of feminists as “man haters” needs to stop. She said that becoming a feminist should be “uncomplicated” and did not narrow her audience to just women. It was a brilliant speech, and completely deserved the standing ovation.

As is to be expected, what with the internet being the internet, she has also received negative feedback. Some users of 4Chan have created a website threatening to reveal sexually explicit pictures of Watson, claiming that they will somehow demean or demolish her feminist views. Rush Limbaugh (who I think should be taken off air immediately) said in his September 23 broadcast: “I know exactly what she’s talking about here, and it’s youth speaking, it’s youthful idealism speaking.  I mean, the truth is every man knows that women run things…That’s been the problem with feminism all along.  Feminism has sought to change basic human nature, and you can’t do that no matter what you do.”

Wow. Thanks for the vote of confidence, Rush!

Other anonymous critics on sites like Reddit, tumblr, and Imgur agree with Watson’s views on feminism but take issue with the name “HeForShe,” arguing that the preposition “for” implies that men will do all the work and women will sit idly by as males react to her call for action. Still others complain that Watson’s celebrity is giving her an unfair advantage on issues like gender equality; that someone less famous or less attractive should have been able to stand up there and give the speech to the same effect.

Each of these arguments stems, I think, from a place of fear. People don’t like change, and with Watson’s speech taking on the momentum it already has, gender equality has made an enormous leap forward. This is threatening to those who are so entrenched in their male-dominated world that they wouldn’t see it change for anything. To those people I say: too damn bad! Society has changed a thousand times over, and it certainly isn’t done.

Let’s address each of these critiques briefly, so I can point out where they have veered off from logic.

Just a few weeks ago, users of 4chan hacked the phones of female celebrities and leaked their nude photographs online. These same people are at it again, thinking that showing feminist, female celebrities as sexual creatures will somehow undermine their feminist message. The short answer is: it won’t. Just because a woman enjoys sex or flaunts her sexuality does not mean she can’t be a feminist. In fact, if a woman is so comfortable in her own skin that nude photos being leaked doesn’t even phase her, that’s a feminist I would hope people idolize.

As for Rush Limbaugh, he is a prime example of a man who sees his male-dominance being threatened and lashes out in any way possible. His claim that “Feminism has sought to change basic human nature” is bullshit. Human nature may be to blame for many of our baser instincts, like seeking out a mate or wanting to procreate, but one gender dominating the other actually comes — most often — from various religions. Ancient, pagan religions favor women above men, and religions like Christianity favor men. Over the years, society took those religious doctrines and accepted them as fact. Oh and losing the “man-hating” connotation that comes from the word “feminism” being “youthful idealism”? Wrong again, Rush. Feminism isn’t just for 24 year olds, and some of gender equality’s most prevalent spokespeople are decades older than Watson.

Next up, the problem with the name “HeForShe,” If you listen to Watson’s entire speech, you’ll hear her call on men AND women multiple times. She wants women to stop being afraid of calling themselves feminists, and for men to accept the title just as willingly. The name, to me, means that, since men are currently the dominant gender, men need to be a driving force behind changing that. It does not mean that women will sit idly by, it means that both genders will work together to achieve equality. As they should.

Finally, Watson’s celebrity makes me thankful she was the one to make that speech. In a perfect world, any man or woman could have made that speech and gotten the same response, but this is not a perfect world. I have said before that celebrities using their fame to support important causes should be admired, not shamed. Waton’s expansive fan base of both men and women made her the perfect person to make that speech, because those fans that truly respect her will hear it, believe it, and share it.

So, as a fan of Emma Watson and of gender equality, I intend to answer her call to action and continue supporting feminism. After you hear it, what will you do?