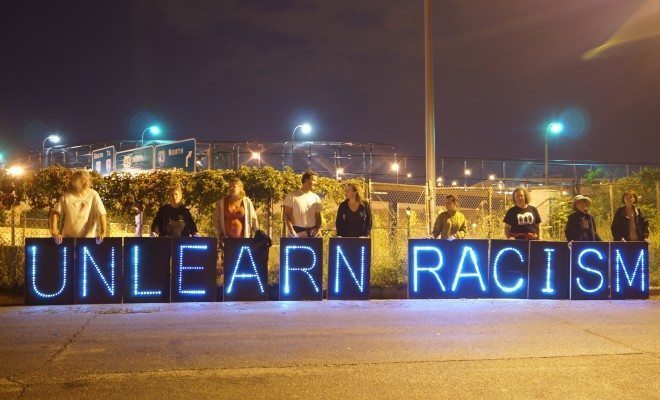 America Has a Huge Racism Problem

A massacre occurred Wednesday at the historic Emanuel African Methodist Episcopal Church in Charleston, South Carolina when nine black people were fatally shot during their weekly bible study. Twenty-one-year-old Dylann Roof confessed to shooting and killing these nine people. The massacre is being reviewed as a hate crime and was almost certainly racially motivated.

Dylann Roof has been charged with 9 counts of murder and one weapon possession charge in the #CharlestonShooting: http://t.co/l3EcsDWT1I

Several interviews with former friends of Roof have raised a concern that I simply can’t disregard. One of Roof’s friends said in an interview in response to the massacre on Wednesday:

It was a race thing because he had told me that black people was taking over the country…that he wanted it to be segregation[…]white with the white, black with the black[…]I mean he was drunk one night and he was just talking about him wanting to hurt a whole bunch of people. And whenever he was saying he was wanting to do something crazy, I just blew it off and didn’t really pay attention to him because he was intoxicated.

The fact that one of Roof’s friends didn’t think anything of his seemingly constant racial slurs, threats of violence against black people, or the plans he revealed to him about the massacre is horribly disconcerting. What Roof did is obviously not this friend’s fault. But the reality is that in 2015, a young man can get drunk and spout off plans to murder people because of their race and his friends can brush it off. They’re desensitized to racist banter, to threats of violence, to prejudice, and to xenophobia. The American society that Dylann Roof lives in brushed off and “didn’t really pay attention” to his grossly discriminatory views because, unfortunately, they aren’t uncommon.

From politicians to a young man from South Carolina, animosity toward minorities in America is a systemic, institutionalized, and far-too-accepted issue that is somehow only discussed in depth when we encounter a tragedy. I couldn’t help but notice the us-versus-them narrative present in both Roof’s remarks to the people in the church at the time of the shooting and in Donald Trump’s presidential announcement from earlier this week. It has been reported that Roof said to the victims, “I have to do it… You rape our women and you’re taking over our country, and you have to go.” Just a few days ago, Trump made similarly racist remarks against Mexicans as he announced his candidacy:

Both Roof and Trump use “you” collectively, grouping an entire race in Roof’s case and an entire country in Trump’s, in an attempt to justify their disgusting prejudices. Both men use rape as a tool–a justification for their hatred–even though these beliefs are completely unfounded. Roof alleged that black people are taking over the country, and Trump declared that Mexico is “killing us economically.”

Summary of #DonaldTrump's speech: "I'm white & rich and I only like other white rich people… & all Mexicans are drug dealers & thugs, bye"

While I seriously doubt that Donald Trump’s presidential campaign speech was anywhere on Dylann Roof’s radar, the point I’m trying to make is that the roots of racism run deep in this country’s core and we overlook them far too often. Whether this problem arises out of ignorance or out of naivety I’m not quite certain, but either way, it needs to stop.