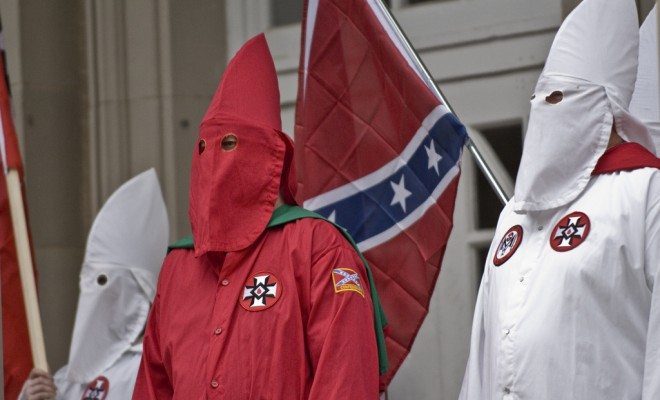 Prominent religions worldwide preach many similar ideals, some of which include exhibiting kindness to others and living a peaceful life. Although these religions have vastly different teachings, they generally urge followers to be good and fair to one another. However, religious extremist groups claiming to adhere to certain religious ideals often distort the teachings of their faith in order to justify violent acts. Some of the groups at large in the United States today include al-Qaeda, Yaweh ben Yaweh, al-Fuqra, The Army of God, and the Klu Klux Klan. These groups, among several others, have all taken the teachings of different religions and mutated them into extremist ideologies used to condone violence.

Click here to see our infographic on religious extremist groups

Christianity to Justify Discrimination and Violence

The Phineas Priesthood is a prime example of a group that twists religious concepts to justify hateful acts. Claiming to be servants of Christ, Phineas Priests believe that in order to carry out God’s will, they must strive for a completely white North America. The group targets Jews, those with mixed-race backgrounds, and anyone else they consider “undesirable.” Individuals professing to be Phineas Priesthood members have used Christianity as an excuse for committing terrorist activities such as bombing, robbery, murder and arson.

The Klu Klux Klan strives for similar goals and defends its actions by saying they are following Christian ideologies. The Klan believes in an entirely Christian and white North America. Though the number of members in the Klan has dwindled since its foundation many years ago, they still have at least 500 members. Just recently in Florida, a police officer was fired from his position after his ties with the KKK were discovered.

Another group that associates with Christianity, but focuses less on adhering to its teachings, is the Sheriff’s Posse Comitatus. This group does not openly use Christian values to defend its actions, but rather calls itself anti-government as well as racist, and has been known to associate with the Klu Klux Klan. Although its members have not committed many high-profile crimes aside from the 1974 assault of an I.R.S. agent, many have been convicted of tax evasion, weapons possession, and attempting to circulate counterfeit bills.

The Army of God, another clandestine group calling itself Christian, believes in preventing abortion by any means necessary. This includes murdering doctors who perform the procedure. The group defended the actions of member Paul Hill, who allegedly murdered abortion doctor John Britton. They claimed, “his actions are morally justified if they were necessary for the purpose of defending innocent human life. Under these conditions, Paul Hill should be acquitted of all charges against him.” This extremist group even provides a how-to manual for its members, explaining how to execute attacks on abortion clinics using bombs, gas and other means. One of the highest profile crimes carried out by an Army of God member occurred in 2001, when Clayton Waagner sent over 550 anthrax threat letters to clinics and signed them with the name Army of God.

Defending Islamic Ideals at All Costs

There are two major groups operating in the United States that use Islamic teachings to justify their violent acts. One such group, Al-Fuqra, has been linked to “shoe-bomber” Richard Reid. Even more infamous is al-Qaeda, which operates out of the United States, in addition to other countries around the world. The philosophies of both groups are ones of “defensive jihad,” a term defined as the defense of Muslim communities at all costs. Osama bin Laden, the founder of al-Qaeda, encouraged each Muslim to fight what they consider to be attacks on Muslims across the world. The extremist group aims to overthrow governments that they believe oppress their Muslim citizens and replace them with genuine Islamic governments. They also stand strongly against all Western influences.

The only major Jewish extremist group that operates in the United States today is The Nation of Yahweh. Yahweh ben Yahweh formed the group, which had a relatively large following in Florida during the 1980s. They believe that blacks are the true Jews and that their founder is the messiah. Ben Yaweh often ordered members to murder his perceived enemies, who were mainly white. Eventually, he formed a group called “The Brotherhood.” In order to become a member of his cult, young men had to kill a “white devil” and bring a body part back. The group is far less active today following the death of ben Yaweh in 2007.

One group that follows multiple ideologies and has an operating base in the United States is called Aum Shinrikyo, also known simply as Aleph. The group, formed in 1984 by a Japanese man named Shoko Ashara, adheres to Buddhist, Hindu, Christian, and New Age ideologies, as well as some elements from other religions. Ashara encouraged his followers to confront the Japanese establishment. The group members have used their spiritual beliefs to justify murder. Aum Shinkrikyo members have not conducted any noteworthy attacks in the United States, despite having a base here. However, the group has wreaked havoc in Japan on multiple occasions. In 1994, members conducted a sarin gas attack which killed seven people. Perhaps the most infamous Aum Shinrikyo attack occurred in 1995 in Tokyo when the group released sarin nerve gas, killing twelve people and injuring over 5,000 others on the metro.

Many religious extremist groups,  such as the Klu Klux Klan, have their own websites to further explain their ideologies. One of the keys to preventing the expansion of these violent groups is to reduce the sympathy potential members feel for their respective causes. Revealing the twisted nature of their allegedly “justified” reasoning by which they commit crimes could be a way to reduce the desire to join. The United States also has organizations that work to alert the public about the statuses of such hate groups. Hopefully through education and awareness, religiously justified violence will one day be a thing of the past.

Marisa Mostek
Marisa Mostek loves globetrotting and writing, so she is living the dream by writing while living abroad in Japan and working as an English teacher. Marisa received her undergraduate degree from the University of Colorado in Boulder and a certificate in journalism from UCLA. Contact Marisa at staff@LawStreetMedia.com.
Share:
Related ItemsAl-Fuqraal-QaedaReligious ExtremismSouthern Poverty Law CenterThe Army of GodYaweh ben Yaweh