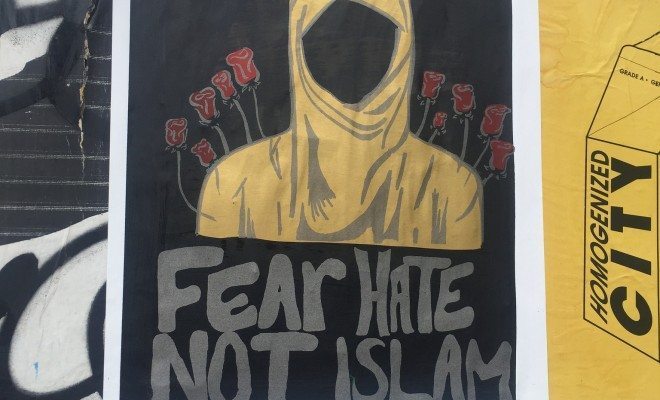 As Anti-Islamic Rhetoric Grows, Hate Crime Against Muslims May be Rising

A development that has so far been described using anecdotal evidence now has some data to back it up: in the wake of the Paris attacks, hate crimes against Muslims and mosques may be increasing. An analysis from the Center for the Study of Hate and Extremism found that the number of hate crimes since the Paris attacks is nearly three times greater than the monthly average in the past five years. While this finding is striking, it is important to acknowledge how incomplete hate crime data is in the United States.

According to the analysis–which used the FBI’s criteria and definitions from American Law Institute’s Model Penal Code to identify hate crime incidents in news reports–the study found 37 suspected hate crimes between November 13 and December 13. Brian Levin, the director of Center for the Study of Hate and Extremism, notes that these findings represent a significant increase based on available data. According to FBI statistics, the United States averaged 12.6 hate crimes with an anti-Islamic bias each month over the previous five years. There were 11 anti-Islamic hate crimes in the week after the San Bernadino shootings alone.

It is important to note that the FBI data on hate crime is, put simply, incomplete. The statistics published each year by the FBI are almost certainly an undercount of the total number of hate crimes. The data, which includes incidents and offenses known to law enforcement, are voluntarily submitted by local law enforcement agencies. While 15,494 agencies participated in Hate Crime Statistics Program last year, only 1,666 agencies reported crimes.

To get a sense of how much information might be missing from the data, let’s look at the numbers. Florida, the third most populous state in the country with nearly 20 million residents, reported 72 hate crimes in 2014. By contrast, the District of Columbia has fewer than 660,000 residents but reported 87 hate crimes over the same period. The FBI even publishes an additional table with all of the agencies that reported zero hate crimes.

Survey data on hate crimes further highlights the gaps in the FBI’s statistics. According to the National Crime Victimization Survey, an annual survey of a nationally representative sample of American households, there were about 293,800 hate crimes in 2012, while the FBI data shows fewer than 6,000.*

It is important to note that both data sets are trying to measure different things–the survey tracks self-identified victimization while the FBI data includes incidents known to law enforcement–but the massive gap illustrates that the FBI data is most likely missing something. Even when you account for the fact that approximately 60 percent of survey respondents did not report their victimization to the police, the numbers remain far apart.

So does this mean we should dismiss the Center for the Study of Hate & Extremism’s analysis? Researchers claim that there was a significant increase in anti-Islamic hate crimes after the Paris attacks, but they are comparing news reports to FBI data, which is most likely incomplete. The lack of accurate data on hate crimes makes it difficult to draw sweeping conclusions, but there is additional evidence to suggest that Islamaphobia is on the rise in America. Another review of anti-Islamic crimes found that crimes targeting mosques increased after the Paris attacks as well. According to the Council on American-Islamic Relations–which tracks damage, harassment, intimidation, and zoning incidents related to mosques–2015 experienced a significant increase in incidents, especially in recent months. There have also been widespread reports of mosques increasing security because of the perceived threat against Muslims. Even if there has not been a dramatic growth in hate crimes, the perception among Muslims in the United States and around the world is, by itself, a notable consequence of these trends.

While researchers look at a possible increase in hate crimes, anti-Islamic rhetoric has been on the rise. Donald Trump has said we should temporarily ban Muslims from entering the country, supports a database to track Muslims, and said that the United States should consider shutting down mosques. Marco Rubio went further to say that the government should not only shut down mosques but any place where radicalization happens. Jeb Bush and Ted Cruz have argued that preference should be given to Christian refugees fleeing prosecution, indicating that they pose less of a threat than Muslims fleeing the same thing. Ben Carson even used an analogy to compare Syrian refugees to a rabid dog.

We may not know the extent to which growing fear of terrorism has caused hate crimes, but as public resentment towards Muslim Americans grows the evidence, while anecdotal, seems difficult to dismiss.

*The FBI added an addendum to its 2012 report to include additional submissions from Kentucky, Massachusetts, New Jersey, and Texas, but even when the additional data is accounted for the total doesn’t increase much. [back]