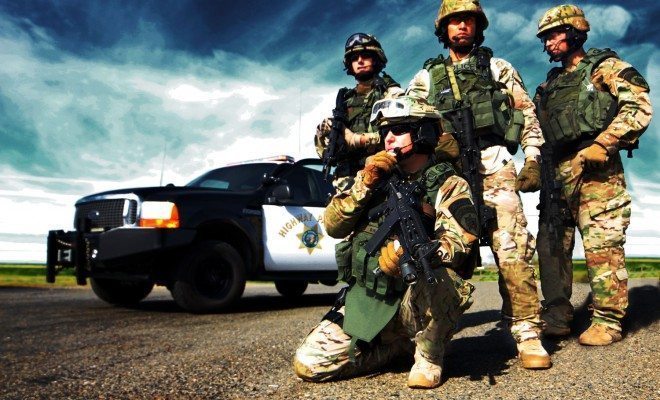 Recent media attention has shed light on many of the controversial aspects of police militarization, from excessive force to the use of paramilitary units in routine policing. Less frequently discussed, however, is the significant lack of transparency of these trends. The public lacks information about the extent and impact of equipment transfers and the increasingly hostile police culture. While the military has historically been able to invoke claims to national security to justify its secrecy, should local police departments, tasked to serve and protect our communities, be able to do the same?

Despite the significant lack of information on police militarization, Peter Kraska, a justice studies professor at Eastern Kentucky University, found some disturbing trends among law enforcement agencies. His article, “Militarizing Mayberry and Beyond,” documents research on police departments in small localities and demonstrates the recent changes in U.S. law enforcement. Kraska’s findings suggest that more and more low-population areas are forming SWAT teams, which are increasingly used for proactive deployment.

Roughly 40 percent of police paramilitary units, or PPUs, were engaged in warrant work in 1984. By 1995 that  statistic skyrocketed: 94 percent of these specialized, soldier-like teams were used to serve warrants. Kraska notes that the majority “of these PPUs serve in the organization as regular patrol officers during their normal duties.” Despite being trained and designed for emergency situations, PPUs are most often deployed for routine practices.

Capt. Chris Cowan of the Richland County (South Carolina) Sheriff’s Department, told the New York Times that an armored vehicle with a mounted gun, “allows the department to stay in step with the criminals who are arming themselves more heavily every day.” Kraska dismisses this perceived arms race saying, “there’s not evidence that the citizenry is grabbing this heavy weaponry themselves, going after cops.”

There is little information about the weaponization of criminals in general, which seems to be a recurring theme in FBI data collection. Kraska claims, “we don’t have good national-level statistics that provide us a good measure of the extent to which the police are fired upon using heavy weaponry, or the policing occupation is more dangerous.” The absence of data is twofold, as little information is available about the increasing militarization of both criminals and police forces.

The Relationship Between Police and Criminals

The U.S. lacks important data on the relationship between police and criminals. The FBI’s Uniform Crime Report does include a publication called “Law Enforcement Officers Killed and Assaulted,” which contains an entire table specifically dedicated to the “Number of victim officers killed with firearms while wearing body armor and receiving torso wounds,” yet they provide no national statistics on killings by police.

“You would think that given these are all taxpayer-funded items, and that they’re coming either directly out of the Department of Defense or they’re coming out of the Department of Homeland Security, and they’re being transferred to supposedly democratically-controlled civilian-based police agencies all over the country, that sort of simple, straight-forward program based in tax dollars, that the data and all the information about that would be easily coughed up.”

It is disturbing that we know so little and that such information is consistently difficult to come by. To gather information about the effects of police militarization, we have to rely on nongovernmental organizations such as the American Civil Liberties Union (ACLU) or the Cato Institute. Moreover, the little information that is available is constrained, as many law enforcement agencies will not answer independent surveys.

While data should be limited in certain circumstances, I question the possible reasons for concealing or not collecting so much important data about our law enforcement. What justification could there be for not granting U.S. citizens access to information about our law enforcement? Agencies’ justifications for refusing to provide information to the ACLU include, “the requested documents contained trade secrets, concerns about jeopardizing law enforcement effectiveness… and the costs associated with producing the documents were simply prohibitive.”

As the issue of proactive, if not aggressive, paramilitary units becomes increasingly prevalent, the situation is exacerbated by the disturbing secrecy with which our government handles data. As Kraska says in his 1997 work, the deep bureaucracy behind this kind of law enforcement “acts as a barrier to police-community ties by fostering a ‘we-they’ attitude.” This barrier not only distinguishes our police from citizens, but also separates citizens from information about our police.

Why isn’t our government providing us with uniform information? Kraska says it is a result of “the nature of military bureaucracy, and increasingly police bureaucracy. The bottom line is it’s one of secrecy.” As police culture transforms into military culture, law enforcement naturally distances itself from the community. The increase in police militarization is inexorably linked with a tightened grip on information about law enforcement practices.

I know I will not stand alone in demanding different treatment by not only those who enforce the law, but also by those who create the law. I demand that this policing style come to end. I demand that the FBI Uniform Crime Reports include information on how many people are killed by our police. I created a petition on WhiteHouse.gov asking the President to request this and filed a Freedom of Information Act request with the FBI. We are all disenfranchised when deprived of information about the enforcement of our laws, so I think we should all demand.

Jake Ephros
Jake Ephros is a native of Montclair, New Jersey where he volunteered for political campaigns from a young age. He studies Political Science, Economics, and Philosophy at American University and looks forward to a career built around political activism, through journalism, organizing, or the government. Contact Jake at staff@LawStreetMedia.com.
Share:
Related ItemsAmerican Civil Liberties UnionDataDepartment of DefenseDepartment of Homeland SecurityFBIFBI Uniform Crime ReportFOIAFreedom of Information ActObamaPolice MilitarizationPres. Barack ObamaUniform Crime Report