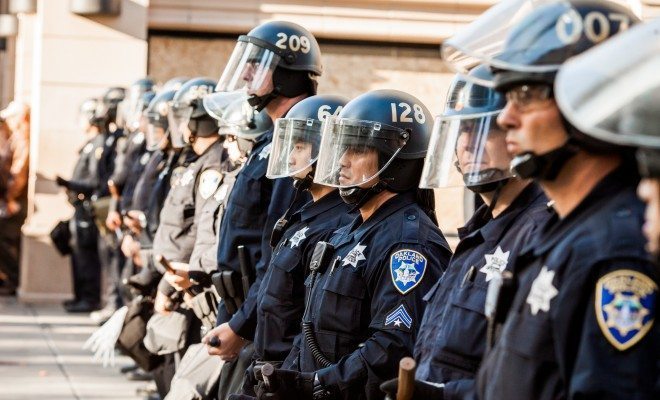 Police Forces Are Getting More Diverse, But is That Enough?

The number of police officers in the United States has increased significantly over the last several decades, according to a Bureau of Justice Statistics report released last week. Local police departments are also becoming more diverse, as women and minorities continue to make up a larger share of forces.

The racial diversity among officers has become a very important issue in light of the growing tensions between minority communities and the police, which was highlighted in the Justice Department’s review of the Ferguson Police Department.

Police departments serving cities with large populations tend to be much more diverse than those in small towns. As you can see in the chart below, nearly three-quarters of all police officers are white, but as the size of a police department’s jurisdiction increases that number goes down considerably. While the composition of larger police departments tends to be more representative of the populations that they serve, this remains an issue for many departments, particularly those in smaller cities. For example, at the time Michael Brown’s death last summer, 50 of the 54 police officers in Ferguson, Missouri were white, yet 65 percent of the city’s residents were black.

The BJS data further indicates that more and more women are joining the ranks. As of 2013, one in eight police officers and one in ten first-line supervisors were female. The total number of female police officers has increased by roughly two percent since 2007, the last time that this data was collected. Much like racial diversity, larger police forces typically have a significantly higher proportion of female officers relative to smaller departments. According to the report, “the percentage of female first-line supervisors was more than twice as high in departments serving 250,000 or more residents (15 percent), compared to departments serving fewer than 50,000 residents (six percent).”

The findings from this report indicate the extent to which diversity has increased in police departments in recent decades, as well as the overall growth in the number of police officers in America. While there have been significant improvements in overall police diversity, there remain several significant gaps among individual police departments. Although larger police departments tend to be much more diverse than smaller ones, many departments are still much more white than the populations that they serve. Having greater racial parity between police and the residents that they interact with may be a important step toward improving community relations. The recent growth in diversity marks one step toward better representation, yet in cities like Ferguson, Missouri, there is still a long way to go.