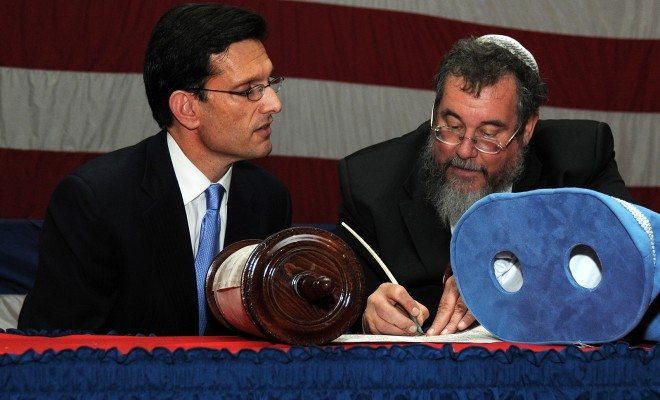 Cantor Defeated in Primary, Israel Will Be Just Fine

Virginia Congressman Eric Cantor is the last Jewish Republican in Congress, but he was just beaten in the primary by Tea Party candidate Dave Brat. As a result, some Jews (and some Goys) have been schvitzing over the lack of Jewish representation in the GOP. Minority representation in the Republican party is one concern, regardless of how disingenuous that concern is among Republicans. Another concern that carries some actual weight in the GOP is that American relations with Israel could be strained. The discussion is posed as though Cantor himself is some sort firewall between American support of and disregard for Israel. While I am Jewish and I do care about Israel, I know that Jerusalem isn’t going to be affected by Cantor being gone. At all.

First, the Republican party is going to be just as pro-Israel as it was before. According to the Pew Research Center, 68 percent of Republicans already sympathize more with Israel than with Palestine. Among conservative Republicans, the statistic is even higher at 75 percent. Only seven percent of the GOP would support Palestine over Israel, while the rest said “neither” (nine percent) or “both” (16 percent). Republicans have their reasons for supporting Israel. Well, they have the one reason: the Muslim Middle East is still a bad thing in the eyes of Republicans; as recently as the last midterm election, Pew revealed how Republicans were one of three main groups to view Islam “unfavorably.” The other two groups were the elderly and less-educated people. It’s not like the GOP is trying to support a demographic in their constituent base. Again, a Pew study shows the political leanings of different Jewish denominations. Only Orthodox Jews have a majority that identifies with the Republican party. All others identify as or at least lean Democratic: Conservative Jews at 64 percent, Reform Jews at 77 percent, and no denomination at 75 percent. On the whole, 70 percent of Jews favor Democrats. Republicans will continue to support Israel fiercely, not because Jews support the GOP, but because of the state’s position as a counterweight against the Muslim Middle East.

When considering the president’s stance, it’s even more evident that Israel’s fate won’t be affected by Cantor’s defeat. In a piece from Bloomberg, Jeffery Goldberg writes about an interview he conducted with Obama. ” Obama will warn Netanyahu that time is running out for Israel as a Jewish-majority democracy…Obama was blunter about Israel’s future than I’ve ever heard him.” The president’s policies on Israeli-relations, as detailed by Goldberg, seem to be some of his strongest and most balanced policies ever. Obama is quoted saying, “I’ve said directly to Prime Minister Netanyahu he has an opportunity to solidify, to lock in, a democratic, Jewish state of Israel that is at peace with its neighbors and…has an opportunity also to take advantage of a potential realignment of interests in the region, as many of the Arab countries see a common threat in Iran.” It’s a mitzvah we have someone in office who can deal with the complexities of an alliance, and not be sorry about being straight with our friends.

Constructively criticizing one another is an essential part of friendship. And what does pro-Israel mean, anyway? In the long run, would the state be better off struggling with its own Arab citizens and belligerent neighbors? Or, isn’t it more likely that Israel’s future will be secure if Jerusalem negotiates with Palestinians? The difference between being a mensch and a shmendrick here isn’t about dogmatism and hostility toward Palestine. Being powerful and pro-Israel means looking down the road and understanding that a peaceful compromise is the greatest possible outcome. It would be enough if we had a president who even acknowledged this, but Obama and Kerry have been actively seeking this goal, too. Dayenu, am I right?

With Cantor gone, no, there won’t be any Congressional Republican Jews. But between the conservative funding of everyone’s least favorite chosen person Sheldon Adelson,a Republican party that’s consistently defensive of Israel, and a president who may be taking the most level-headed approach to the matter in U.S. history, our relationship with Jerusalem will remain solid. We’ll remain the shmeer to their bagel, they the capers to our lox. Still, it’s amazing to me that people care so much about the lack of Jews in the Republican party when it seems as though the Republican party cares so little about Jews. The conservative pro-Israel stance is based on defining Jews against the rest of the Middle East. Should I kvetch that American political parties actually bring Jews into the national conversation? Maybe not. But it may be less insulting to ignore Jews than to use us as a means to end.

Jake Ephros
Jake Ephros is a native of Montclair, New Jersey where he volunteered for political campaigns from a young age. He studies Political Science, Economics, and Philosophy at American University and looks forward to a career built around political activism, through journalism, organizing, or the government. Contact Jake at staff@LawStreetMedia.com.
Share:
Related ItemsBarack ObamaDemocratsElectionsEric CantorGOPIslamIsraelJerusalemJewishMiddle EastPalestinePres. Barack ObamaPres. Obama