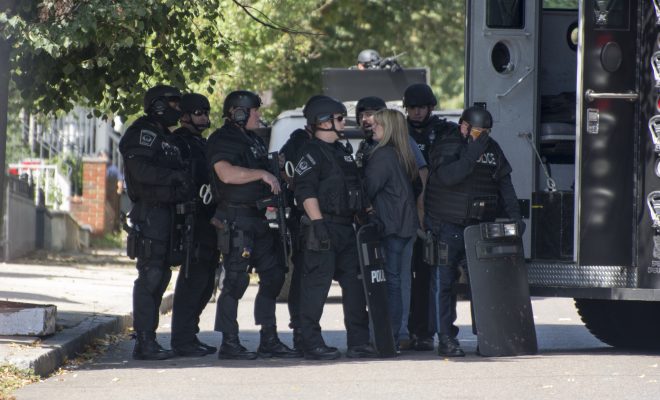 SWAT Raids Can be Deadly, Even for People with Small Amounts of Marijuana

Though marijuana use is rarely–if ever–fatal, possession and trafficking can be deadly. A New York Times investigation into the aggressive tactics used by SWAT teams across the U.S. revealed that a startling number of people have been killed as the result of a SWAT raid. Of the 85 fatal raids since 2010–in which either a suspect or officer was killed, 20 involved marijuana, according to a Washington Post analysis of the data. In many instances they involved relatively minor infractions.

The Times investigation details episodes in which SWAT teams raided a suspect’s house without a warrant, a so-called “no-knock raid.” Because of the hurried and often frantic nature of the raids, fatal mistakes sometimes happen. In one deadly 2010 raid, for instance, Trevon Cole was targeted after he sold 1.8 ounces of marijuana to an undercover officer. A SWAT team raided Cole’s residence, and shot and killed him as he flushed his marijuana stash down the toilet. He was unarmed.

There are thousands of these raids each year, and the vast majority do not result in fatalities. But that there are fatal accidents, especially involving people who are handling a drug that is legal in some states and illegal in others, is enough to justify scrutiny. Marijuana, which is legal in some form in more than half of the U.S., is not inherently deadly. In fact, according to the Drug Enforcement Administration, “no death from overdose of marijuana has been reported.”

But that does not stop SWAT teams from busting down the doors of those suspected of growing or selling the drug. “These are dangerous people we’re dealing with,” a SWAT commander in Arkansas told the Times. “If you have a dope house next door there’s probably nothing the police can do that would be overreacting.”

Officers have also been killed during these raids. In one unfortunate case, a SWAT team conducted an early-morning raid on the rural Texas home of Henry Magee, who an informant said was growing 12 marijuana plants. The officers burst into the home before announcing their presence, and Magee, thinking his house was being robbed, shot and killed an officer.

A grand jury later declined to indict Magee with capital murder charges, but he was indicted on a drug trafficking charge. “All of us felt that if I were in bed and heard anything that made me get up and get a gun, and all of a sudden my door explodes in, I’m shooting,” one of the jurors involved in the case told the Times. “Why in the world would you do a full-out assault on a guy growing pot?”