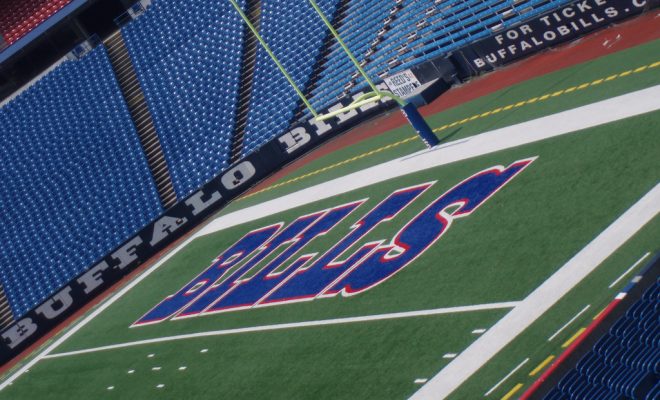 The National Football League suspended a Buffalo Bills player Tuesday for violating the NFL’s substance abuse policy. Offensive tackle Seantrel Henderson was suspended for 10 games. According to what Henderson’s agent Brian Fettner said to the Associated Press, this suspension comes from the player’s use of medical marijuana to treat his Crohn’s disease

The Bills announced the league had notified them on Tuesday of their player’s suspension.

“The league has notified us of the suspension and we are moving forward with our preparations to play the Oakland Raiders this Sunday,” the Bills said in their statement.

This is Henderson’s second suspension of this year; he began the season with a four-game suspension.

Henderson was diagnosed with Crohn’s a year ago, and underwent multiple surgeries on his intestines in the previous offseason.

“The reality is, the NFL’s position has been if you need medical marijuana then you’re too sick to play,” Fettner also said. “But that’s just not the case for Seantrel Henderson.”

The NFL’s substance policy does not allow medical exemptions for marijuana use, although it does for some other banned substances.

According to Yahoo, “If he were to fail a third drug test, Henderson would be banned for life, with the ability to apply for reinstatement after a year.”

Henderson has spoken in defense of the drug previously.

“I’ve got doctors telling me this is the No. 1 medicine that would help your disease,” Henderson told The Buffalo News. “You try to tell that to the league and it seems like they didn’t care too much.”

@ZIGGY15X Thankfully @h_seantrel didn’t beat a woman or they might have tacked another game onto the 10 game suspension for mmj.

If Henderson chooses to, he could pursue a lawsuit against the NFL.

Julia Bryant
Julia Bryant is an Editorial Senior Fellow at Law Street from Howard County, Maryland. She is a junior at the University of Maryland, College Park, pursuing a Bachelor’s degree in Journalism and Economics. You can contact Julia at JBryant@LawStreetMedia.com.
Share:
Related ItemsBuffalo BillsNFLSeantrel HendersonSubstance AbuseSuspension