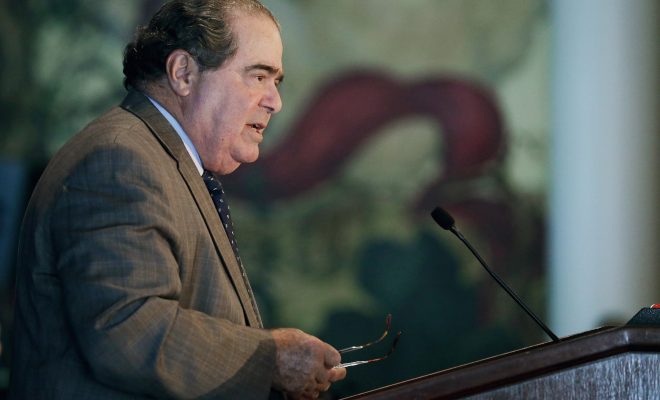 The Federalist Society Released Part of a Documentary about Antonin Scalia

Yesterday, on the anniversary of former Supreme Court Justice Antonin Scalia’s death, the Federalist Society released an excerpt from a documentary about his life and legacy. The eight-minute video includes quotes from his children and the other Supreme Court Justices, and some clips of him in action. “On the anniversary of his passing, some of the people who knew him best recount the life and legacy of the ‘inimitable’ Antonin Scalia–father, husband, jurist,” says a statement on the conservative organization’s website.

“He was a principled man.” – Chief Justice Roberts
“I miss him every day. He was inimitable.” – Justice Ginsburg https://t.co/ya7rFSbXfL

Scalia’s seat on the Supreme Court has been empty ever since he passed away, as Republicans refused to vote, or even consider, former President Obama’s nominee to replace him, Merrick Garland. Now that President Trump has nominated Neil Gorsuch, who is a conservative judge very similar to Scalia in many ways, a lot of Democrats have criticized what they call the GOP’s double standard. Outspoken civil rights activist Reverend Al Sharpton said over the weekend:

Now they want to talk about, since Trump has nominated Gorsuch, how qualified he is. Well, he ain’t no more qualified than Garland was. The danger of this proceeding is, are you now saying that you will select Supreme Court judges based on if the party on the White House corresponds with the party that is the majority of the Senate, then you have in effect changed the constitutional requirements to select a Supreme Court judge.

It’s unclear if or when the Federalist Society will release a full-length documentary about the former justice. But the video clip ends with the words “coming soon.” In the meantime, Neil Gorsuch is on the long road of questionnaires, procedures, and hearings that make up the confirmation process, to finally replace the vacancy left by Scalia.

Emma Von Zeipel
Emma Von Zeipel is a staff writer at Law Street Media. She is originally from one of the islands of Stockholm, Sweden. After working for Democratic Voice of Burma in Thailand, she ended up in New York City. She has a BA in journalism from Stockholm University and is passionate about human rights, good books, horses, and European chocolate. Contact Emma at EVonZeipel@LawStreetMedia.com.
Share:
Related ItemsAntonin ScaliaDocumentaryFederalist SocietySupreme Court Justicestrump administrationU.S. Supreme Court