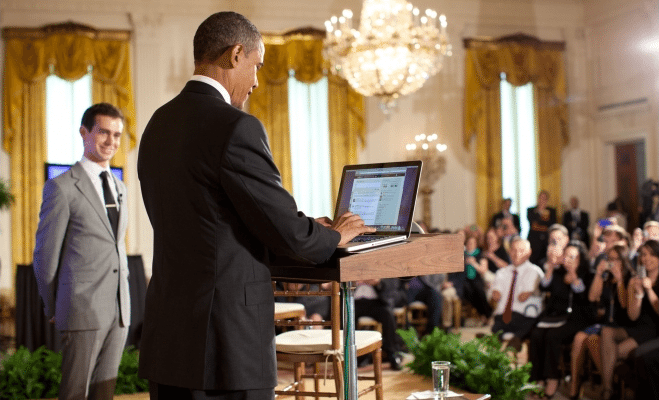 The Biggest Political Twitter Mishaps, Gaffes, and Weird Statements of 2013

Twitter has become one of the easiest ways to provide snippets of information to the public. Celebrities, writers, and of course, politicians, can accrue followers to spread their messages. But not everyone is as twitter-savvy as they could be. In fact, some politicians have tweeted some pretty embarrassing, stupid, and ridiculous things. So….(drumroll please!)

Let’s countdown some of the biggest political Twitter mistakes, gaffes, ridiculous statements, and abuses of 2013!

Thanks Politiwoops, for archiving this!

Now, Latham did take down the post very quickly, but still, someone on his staff should have thought to point out that he was getting mad over a fake news story. Fact checking, guys. It really isn’t that hard.

The backstory: Alright, you caught me, Ari Fleischer isn’t actually a politician, but I couldn’t pass this one up. He is a former White House Press Secretary though, so he counts. In this tweet from January of 2013, he referenced the fiscal cliff deal reached in Congress on January 1, 2013. In that deal, tax deductions for individuals donating to charities would be limited. But, it’s important to note that it would only apply to individuals making $250,000 or more, yearly. If Mr. Fleischer was worried about this change to tax breaks applying to him, he’s clearly doing relatively well. So, for him to choose to withhold money from charities because it either a) wouldn’t benefit him as much or b) because it made a political point, was pretty awful. The fact that Fleischer happily tweeted this fact for all the world to see?

The backstory: We all make typos, and autocorrect has brought down even the most text-savvy among us. But this is very, very bad. What’s worse is that neither he nor his staff noticed this god awful typo for 8 weeks. That’s right, this tweet remained on Rep Vargas’s twitter for 2 months.

The backstory: Everyone threw blame around during the shutdown. But most of it came from pundits and commentators, not elected officials themselves. Using the hashtag #harryreidsshutdown was pretty disingenuous, and it’s safe to say that this was simply not polite political rhetoric.

Play nice, Frank Niceley. Otherwise your name will be misleading.

Politicians are supposed to provide information to their constitutions and fight for their interests, not mock each other.

6. David Cameron proves it’s not just American politicians who are embarrassing on Twitter

The backstory: Ok, this one isn’t actually that embarrassing. It turns out this is an older Twitter account set up during the previous Prime Minister, Gordon Brown’s time in office. This account is barely used today. But it auto follows back anyone who follows it. So, a bunch of spam accounts have a Twitter follower that reads as “UK Prime Minister.” Even if this isn’t the PM’s team’s doing, they should have really taken care of these old accounts a long, long time ago.

Shout out to Public Shaming!

The backstory: A group of “Dreamers,” or young, undocumented immigrants who have usually been successful in the US, visited Steve King’s DC office. They didn’t invade. They walked in to voice their concerns, as they have the right to do. I highly doubt Steve King actually felt unsafe, and if he did, it’s because he’s a racist neanderthal who does things like compare these “Dreamers” to drug mules.

I need to take a quick eye-roll timeout.

4. Jeb Bush doesn’t do his research

The backstory: Apparently, there’s some crazy rumor going around that the US is closing its embassy in Vatican City. It’s not true. Completely not true. It’s being moved into a new compound with the Italian Embassy in Rome, but they will still have separate offices and staff. The Vatican Embassy will even have it’s own entrance. And it will actually be located .1 miles closer to the Holy See. I got all of this information by tapping top secret wires, of course.

I’m only half this coordinated.

I’m kidding. I got it through a google search. Which was apparently not something Jeb Bush thought to do before tweeting this information.

The backstory: I would write some snarky response to the RNC’s claim that racism has ended, but the good people of the internet have already done it for me! The hashtag #RacismEndedWhen started trending and some truly inspired responses were born:

Check out this compilation, courtesy of BuzzFeed.

The backstory: Dan Pfeiffer, a senior advisor to President Obama, was tweeting back and forth with New York Times journalist Jonathan Martin regarding an article about the shutdown.

Apparently he meant to say “bigger” but had a very unfortunate typo. Another Journalist, Lachlan Markay caught the error and immediately retweeted it, despite Pfeiffer’s attempts to delete it. Pfeiffer had tweeted it from his official White House account. Again, we all make typos. But if you’re going to be tweeting from your official White House Twitter handle, it really is important to double, triple, and quadruple check what you’re saying.

1. Rep. Steve Stockman thinks babies should be given guns

Public Shaming caught this one.

The backstory: There’s a lot of terrifying implications about this tweet. First, it implies that Rep. Steve Stockman thinks that women who have abortions should be shot. This comes from Stockman’s campaign Twitter, meaning that he wants people who might vote for him to know this. This is horrifyingly violent rhetoric. Rep. Stockman, put down the computer, please.

It’s time to stop for the day.