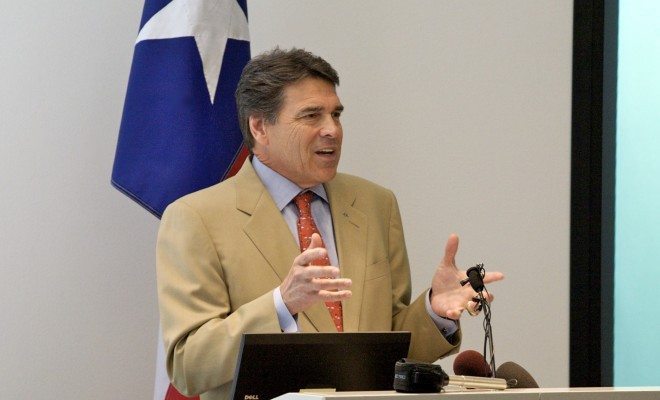 Texas Governor and former 2012 Presidential candidate Rick Perry was indicted by a grand jury last Friday. The indictment claims that he used misused government property for his own political gain, and that he attempted to influence a public servant using the powers of his office. If convicted of these crimes, both of which are felonies, Perry could face serious time in prison–up to 99 years.

The controversy stems from a rather small incident–the Travis County District Attorney, a Democrat named Rosemary Lehmberg, was caught driving very, very drunk. In fact, she was sitting in her church parking lot with an open bottle of vodka, the epitome of class. Her Blood Alcohol Level (BAC) was almost three times the legal limit. She reportedly kicked the officers before they restrained her, and then stuck her tongue out at them. Overall, it was an entirely inappropriate and illegal way for a District Attorney to comport herself.

Perry, understandably, asked her to resign. However, Perry is  Republican, and Lehmberg was a Democrat. So, she and the rest of the Texas Democrats worried that she would be replaced by a Republican District Attorney. That’s where this whole thing gets a little weird. Perry threatened to veto funding for an anti-corruption unit that is part of Lehmberg’s purview in Travis County. Lehmberg refused to step down, so Perry went through with his threat and vetoed the unit’s funding. In response, a watchdog agency filed an ethics charge, a prosecutor brought the issue to the grand jury, and Perry was indicted on Friday.

There’s a lot of debate over whether or not the indictment was fair, or just a gross example of political game-playing. The position of Rick Perry and his supporters is that the governor does have the power to veto funding in such a way. As Ari Melber at MSNBC puts it, the governor’s supporters’ argument is,

There are two felony counts, both stemming from Perry’s public battle to veto funds for a local prosecutor.  Yet under the Texas Constitution, the governor has explicit authority for such vetos.  And under the U.S. Constitution, politicians have wide authority to talk about their vetoes and votes – it’s a core example of protected political speech.

The prosecutors argue that even though the Texas Governor is entitled to the above enumerated powers, he or she cannot use them for illegal purposes. So the question that dominates this issue is: was what Rick Perry did actually illegal, or just ill-conceived?

One of the more sketchy things about the whole situation is that the unit that was defunded, the one that dealt with ethics, was also looking into some possible Republican infractions. In fact, they were the ones who had previously looked into an ethical breach by former House Majority Leader Tom Delay.

So, there were political motives for Perry to veto Lehmberg’s funding, multiple political motives in fact. But the drunk driving issue is still pretty damning–she did probably deserve to lose her job. So this entire issue ends up being kind of hypocritical and problematic. A Republican governor maybe plays politics for political gain, ends up getting called out by a left-leaning watchdog group, and then everyone gets to run the headline “Rick Perry indicted.” Even some Democrats are questioning what’s happening in Texas right now–David Axelrod, a former Obama political adviser,  said that the move seemed “sketchy.”

Did Rick Perry cross a line? Maybe. Will he actually get in trouble as a result of this indictment? Possibly. Does he deserve to go to jail? Most likely not. Is the media coverage, blow to public opinion, and the like going to hurt him if he actually tries for a 2016 run? Absolutely.

That’s what this is about. Perry had a notably unsuccessful 2012 bid, but insiders say that he’s been grooming himself for 2016 again. While a scandal doesn’t necessarily disqualify a candidate (hello, Chris Christie), it certainly doesn’t help. A conviction out of this indictment would definitely send his future political ambitions down the drain. And when it’s framed that way–as a not particularly well-executed political move, the ordeal seems much less scandalous. Everyone in this story is equally guilty of playing politics–and well that’s pretty much it.

Anneliese Mahoney
Anneliese Mahoney is Managing Editor at Law Street and a Connecticut transplant to Washington D.C. She has a Bachelor’s degree in International Affairs from the George Washington University, and a passion for law, politics, and social issues. Contact Anneliese at amahoney@LawStreetMedia.com.
Share:
Related ItemsPoliticsRick PerryTexas