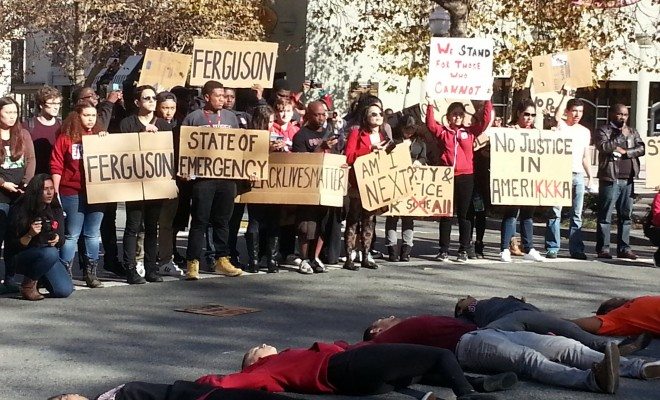 Logic tells us that if two wrongs don’t make a right, then many, many wrongs can’t possibly make any sort of right either. That’s all I could think about when I saw the coverage of the shooting of two police officers in Ferguson, Missouri Wednesday night.

It’s the latest event in a saga that in some ways began this August with the police shooting of 18-year-old Michael Brown, and in some ways has been happening for years. It’s sparked conversations on police brutality and militarization, racism, systemic biases against young black men in our society, the justice system, and so much more. But even though those conversations are happening on a national level, what’s happening on the ground isn’t quite as academic or theoretical. It’s real, it’s scary, and honestly, last night’s events show that it probably isn’t going to get better anytime soon.

Ferguson’s police chief Tom Jackson resigned. That was probably inevitable after the release of a pretty damning Department of Justice report that highlighted serious racial biases and constitutional breaks in Ferguson. For a more extensive look at the main takeaways of that report, check out fellow Law Streeter Alexis Evans’ article here.

After Jackson resigned, a rally started at the Ferguson police department. While the protesters were obviously pleased that the head of the Ferguson police department had resigned, they didn’t think it was enough to stem clear instances of racial profiling, bias, and intimidation within the force. Protesters actually advocated for the mayor of Ferguson, James Knowles III, to step down as well. Around midnight, those protests took a turn when gunshots rang out. Witnesses say there were four in all. Two found targets–one in the shoulder of a 41-year-old St. Louis County officer, and another in the face of a 32-year-old officer from the nearby town of Webster Groves. Both were in serious condition, but were recently released from the hospital.

In light of the incident, St. Louis County Police and the Mississippi Highway Patrol are going to be taking over controlling the protests in the hopes that things don’t become more violent.

Many around the country have condemned the actions of the shooter. Attorney General Eric Holder, for example, stated:

This heinous assault on two brave law enforcement officers was inexcusable and repugnant. I condemn violence against any public safety officials in the strongest terms, and the Department of Justice will never accept any threats or violence directed at those who serve and protect our communities. … Such senseless acts of violence threaten the very reforms that nonviolent protesters in Ferguson and around the country have been working towards for the past several months.

Despite the fact that new forces are being brought in, I’m not sure it’s safe to say that issues in Ferguson are going to get any better. This is turmoil that has been stewing for years, and Michael Brown’s death just set it boiling. While the protesters have been mostly peaceful, there are always people who do bad things–people who commit those wrongs that can never add up to a right. Hopefully, real dialogue and reform will start happening soon.

Anneliese Mahoney
Anneliese Mahoney is Managing Editor at Law Street and a Connecticut transplant to Washington D.C. She has a Bachelor’s degree in International Affairs from the George Washington University, and a passion for law, politics, and social issues. Contact Anneliese at amahoney@LawStreetMedia.com.
Share:
Related ItemsEric HolderFergusonMichael BrownMissouriPoliceProtestersProtestsRaceShooting