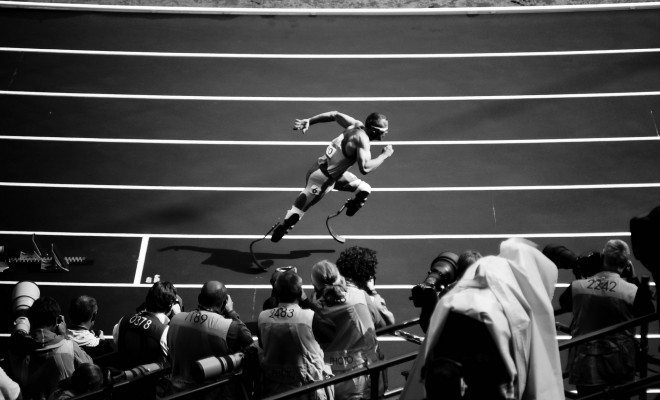 The case of Oscar Pistorius, the world-famous South African Olympic and Paralympic athlete, has been highly contentious since its beginning. On Valentine’s Day 2013, Pistorius shot his girlfriend, Reeva Steenkamp, in his home, through a locked bathroom door. His defense team claimed he thought she was an intruder and was trying to defend himself. What followed was a flurry of speculation over whether or not the fatal shooting was an accident or intentional; the case was only made even more public by Pistorius’s star status. In 2014, Pistorius was found guilty of culpable homicide–essentially manslaughter. But the prosecutors argued that a culpable homicide verdict didn’t go far enough, and an appeals court just overturned that decision to instead find Pistorius guilty of murder. Now, the sprinter is most likely headed back to prison, and the case may be headed further down the line to South Africa’s Constitutional Court.

The appeal that landed Pistorius back in prison is as seemingly complicated as the case itself. The appeals court that overturned the culpable homicide charge and instead found Pistorius guilty of murder didn’t have an issue with the lower court’s interpretation of the facts of the case, but rather its interpretation of the law. Whether or not Pistorius was guilty or not rested on a concept in the South African justice system called dolus eventualis. It’s defined as “awareness of the likely outcome of an action”–essentially, did Pistorius know what was going to happen when he shot into that bathroom door.

The original court judgment ruled that because he didn’t know that it was Steenkamp behind the door, dolus eventualis didn’t apply. But Judge Eric Leach, of South Africa’s Supreme Court of Appeal, ruled that that judgment was a misinterpretation of the legal principle. According to Leach, it didn’t matter if Pistorius knew that it was Steenkamp behind that door, it matters that he knew someone was behind that door, and firing into would likely result in the death of that person. According to CNN:

It was ‘common sense’ that Pistorius must have known he was carrying out a potentially lethal act that ‘gambled with life’ when he fired his gun through the closed toilet door, [Leach] said.

Now, Pistorius’s team may take the case to the next level for one final appeal in front of the highest court in South Africa–the Constitutional Court. In the meantime, he’s expected to remain under the house arrest he was released to this fall while he waits for a new sentencing hearing. Given that the minimum sentence in South Africa for murder is fifteen years, he could be going back to prison for a very long time.

Anneliese Mahoney
Anneliese Mahoney is Managing Editor at Law Street and a Connecticut transplant to Washington D.C. She has a Bachelor’s degree in International Affairs from the George Washington University, and a passion for law, politics, and social issues. Contact Anneliese at amahoney@LawStreetMedia.com.
Share:
Related ItemsAppealsCulpable HomicideMurderOlympicsOscar PistoriusReeva SteenkampSouth Africa