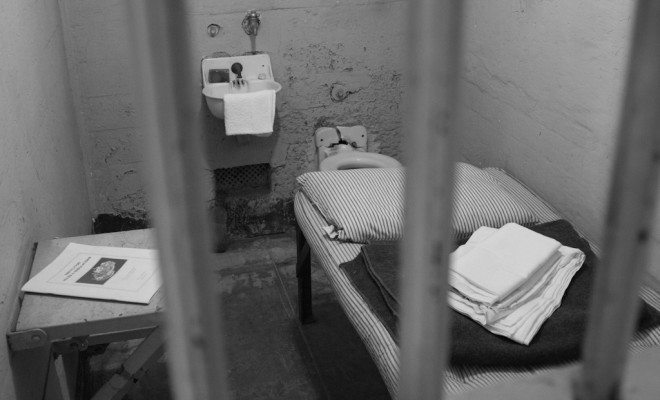 This Thursday, President Obama will become the first sitting president to visit a federal prison. He is scheduled to visit with inmates and officials at the El Reno Federal Correction Institute near Oklahoma City. This is just the latest of many steps taken by the Obama administration in an attempt to reform the American prison system.

At the prison, Obama will also conduct an interview with VICE that will be a part of a documentary airing this fall on HBO focusing on America’s broken criminal justice system. The Federal Bureau of Prisons website confirms that El Reno is a medium security federal correctional institution, housing more than 1,000 inmates. Another 248 inmates reside at an adjacent minimum-security camp.

The visit is a part of a week focusing on criminal justice reform, beginning with a speech on Tuesday for the NAACP’s annual convention in Philadelphia. White House Press Secretary Josh Earnest said that Obama will:

Outline the unfairness in much of our criminal justice system, highlight bipartisan ideas for reform, and lay out his own ideas to make our justice system fairer, smarter, and more cost-effective while keeping the American people safe and secure.

Obama has a long history of speaking out about prison system reform. The White House has posted a video of conversation between the president and David Simon, writer of the HBO television show, “The Wire,” in which Obama discusses the massive trend toward incarceration, for even nonviolent drug offenders, which began in the 1990s. He said:

Folks go in at great expense to the state, many times trained to become more hardened criminals while in prison, [and] come out and are basically unemployable.

In Obama’s State of the Union Speech in January, he highlighted criminal justice reform, connecting it to high profile clashes between law enforcement and minority communities.

While there have been years of discussion on the issue, we are just now really starting to see a change With 2.3 million Americans behind bars, the United States has the highest incarceration rate of any country in the world. Despite containing less than five percent of the world’s population, the United States incarcerates nearly a quarter of the world’s prisoners. With a criminal justice system that is marred by racial and class based disparities, these instances of inequality are visible at every step of the criminal process. They often lead to wrongful convictions and inconsistent sentencing that disproportionately affect people of color and low-income individuals. There are also many allegations of racial profiling, which specifically targets minority individuals of color. Finally, the criminal justice system has massive hidden economic and societal costs that reverberate throughout society, affecting us all.

The Executive isn’t the only branch getting in on criminal justice reform. The House has also introduced a new bipartisan bill–the SAFE Justice Act–proposing to reduce the United States prison population, while also cutting crime and saving money. The bill proposes a broad set of reforms to the U.S. justice system, including increasing the use of sentencing alternatives such as probation of certain non-violent offenders; encouraging judicial districts to operate mental health, veteran and other problem-solving courts; and prioritizing prison space for violent and “career” criminals by expanding the release of geriatric and terminally ill offenders. It would also expand earned-time policies to inmates who participate in programs to reduce their recidivism rates, introduce mental health and de-escalation training programs for prison staff, and require performance-based contracting for halfway houses, among other reforms.

The SAFE Justice Act has a lot of potential, as does Obama’s push for reform. But there’s so much more to be done, including a need to change the way we perceive felons. They are so quickly written off as criminals, murderers, or drains on society. They are separated from the rest of society as soon as they are released. So many are falsely convicted or just wait in prisons for months or years before they can even receive a trial. Changes to the system don’t just involve policies–they involve redefining how we treat prisoners as well. So while Obama is taking steps in the right direction by visiting prisons and speaking out about equality, there remains a long road ahead.

Angel Idowu
Angel Idowu is a member of the Beloit College Class of 2016 and was a Law Street Media Fellow for the Summer of 2015. Contact Angel at staff@LawStreetMedia.com.
Share:
Related ItemsCriminal JusticeCriminal Justice ReformObamaPresident ObamaPrison