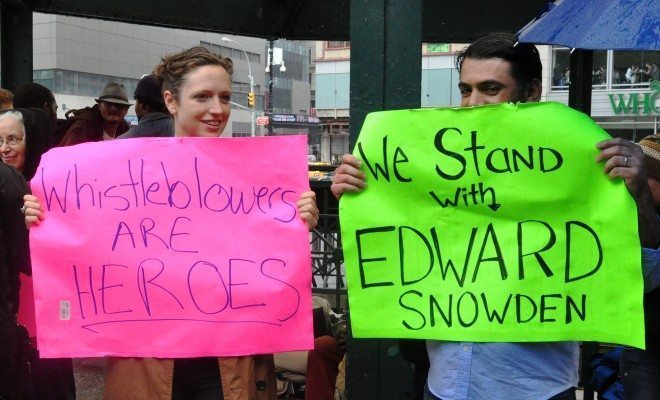 The latest development in the saga over the National Security Administration’s (NSA) bulk data collection just occurred, as an appeals court ruled that the NSA’s actions were illegal. This is big, as this ruling may pave the way for changes in the surveillance programs conducted on the American people by the NSA.

The American Civil Liberty Union (ACLU) led a case against the NSA’s bulk data collecting procedures that developed in the wake of Edward Snowden’s revelations. As soon as this information was brought to light, many Americans reacted with outrage, demanding an explanation and justification from the government. Immediately, the NSA and the Obama Administration cited the Patriot Act as a defense–the broad piece of legislation passed in the immediate aftermath of the 9/11 terrorist attacks. The intention of the Patriot Act is to combat terrorism and prevent an attack like 9/11 from ever occurring again on American soil. While the Patriot Act originally passed with incredibly strong support–only Senator Russ Feingold (D-WI) voted against it–it has since come under intense criticism for its breadth and implications.

Interestingly enough, the appeals court did not rule on the actual constitutionality of the NSA’s data collection. Rather the court stated that the provision of the Patriot Act being used to defend it simply did not apply. As the Wall Street Journal explains:

The court declined to address the issue of whether the program violates Americans’ rights, because, they found, it was never properly authorized by existing law.

The case was also sent back to a lower court for review in light of this decision; however, this ruling, no matter how specific and limited, does create an interesting conundrum in the halls of Congress. The much-maligned Patriot Act is currently up for debate. The provision that the government was relying upon to justify NSA spying will actually expire on June 1 if no action to reauthorize or extend it is taken by Congress. By stating that the provision of the Patriot Act used to justify this spying is not applicable, the judges have put another task on Congress’ to do list if they want the NSA data collection program to continue. The move to shift the responsibility to Congress’ lap wasn’t particularly subtle either. The three judge panel even stated:

We do so comfortably in the full understanding that if Congress chooses to authorize such a far‐reaching and unprecedented program, it has every opportunity to do so, and to do so unambiguously.

While this ruling by no means ensures any sort of end to the NSA’s heavily criticized phone data collection program, it certainly is a blow to the administrations that touted its legality under the Patriot Act, and a blow to the Patriot Act itself. Given the Congress’ lack of productivity and rampant disagreement there’s no way to tell what ramifications this ruling will have.

Anneliese Mahoney
Anneliese Mahoney is Managing Editor at Law Street and a Connecticut transplant to Washington D.C. She has a Bachelor’s degree in International Affairs from the George Washington University, and a passion for law, politics, and social issues. Contact Anneliese at amahoney@LawStreetMedia.com.
Share:
Related Items9/11CongressData CollectionEdward SnowdenIllegal ActivityObama AdministrationPatriot ActSNASpyingSurveillanceTerrorism