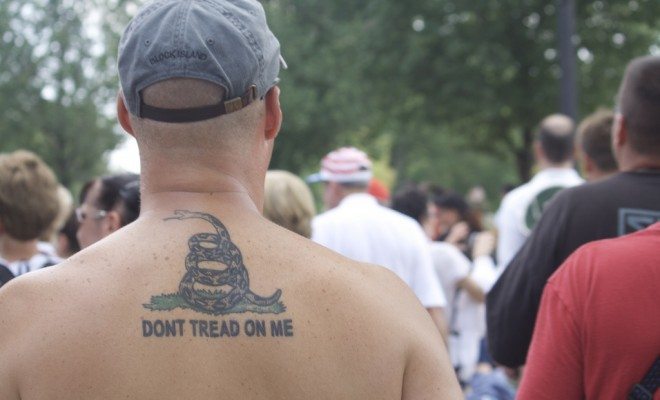 “We aren’t in Kansas anymore.” That must be what Republican Kansas Governor Sam Brownback is thinking right now, after over 100 Republicans defected and offered their support to his Democratic challenger, Paul Davis. The defectors are mainly moderate Republicans that have been bullied by Brownback and the Tea Party movement. This major political defection is their way of striking back. In the continuing war between the Tea Party and the Republican establishment, this sends a powerful message–a centrist Democrat is closer to moderate Republican values than a Tea Partier is.

This defection comes partly as a form of political payback and partly from an actual belief that Paul Davis is the better choice for Kansas. Early in his governorship, Brownback led a charge to purge moderate Republicans from the state government. For example, Steve Morris, former president of the Kansas State Senate, was ousted by a primary challenger whose political beliefs fell further to the right. He has said that Brownback privately told him that he could have stopped the upset but chose not too, as Morris and Brownback often fought over policy. So it shouldn’t be surprising that Morris is now supporting Davis. In a recent interview, in reference to Brownback, Davis commented, “he essentially declared war with moderate Republicans during the last State Senate election. Many moderate Republicans saw that, and they are coming to support my campaign.”

Many of the other 100-odd defectors, including state legislators, mayors, and delegates to the Republican National Convention, broke from Brownback for ideological reasons. The list of reasons why is long, with many focusing on the consequences of Brownback’s extreme tax cuts. The tax cuts have caused an increase in deficit spending, massive cuts in education spending, a depletion of Kansas’s highway funds, and have offered none of the promised job creation. Other reasons for the defection include Brownback offering judgeships as political prizes and pushing extremely socially conservative legislation.

Even before this defection, Brownback faced a challenging reelection bid. Nate Silver’s  prediction on fivethirtyeight.com gave Brownback only a 60 percent chance of winning based on polling data. Though still favored, 60 percent was a relatively small margin for a state as red Kansas. Now with this defection, I have to imagine his chances have shrunken significantly.

In many ways this election is not a Republican versus a Democrat, nor is it an election where voters have to decide between traditional Republican or Democratic values. It is an election where voters have to choose between Tea Party values or very centrist values; a continuation of the war between moderate Republicans and the Tea Party.  Davis is setting himself up to win by opposing Brownback on hot issues such as taxes and spending on schools and highways, but has taken a more conservative view on issues that could rile up Brownback’s base–the religious right. For instance, Davis has said he would leave Kansas’ very strict abortion laws in place. This election is now about moderate Republicans striking back at the Tea Party, not a Democrat challenging a Republican.

Brownback would probably deny the moderate legitimacy of his challenger, saying voters do not know who Davis is, and that he is just an Obama-style Democrat. Brownback has said that voters will have to choose between a Reagan approach or an Obama approach to government. What Brownback may be failing to realize is that moderate Republicans would never abandon someone who governed like Reagan, but they may not fall in line with someone who governs like a Tea Partier.

As much as I would love to think that this will become a trend and we would see moderate Republicans defect across the country, that is probably not going to happen. Kansas had a perfect storm of conditions that led to this rebellion. One is that Kansas has a particularly inept governor that went out of his way to exile moderates and pass much-maligned laws. Another is that there was a very centrist Democratic candidate that already had a chance to win. This was important because it gave the Republican defection substance; it was not merely symbolic. It is unlikely that this would happen under any other conditions–we really shouldn’t expect moderates from either party to defect anywhere else, anytime soon. Which is unfortunate, because our country sure could use movement towards the center of the political spectrum like we are seeing in Kansas.

Featured image courtesy of [mar is sea Y via Flickr]