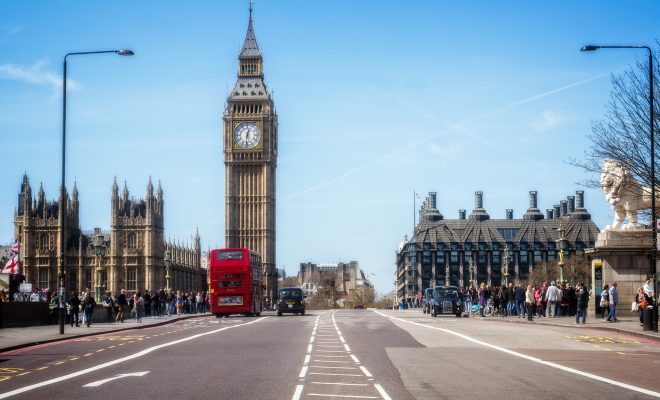 Update 2/23/2017: Despite earlier reports, Abu Izzadeen was not the attacker. Izzadeen is still in prison on unrelated matters. The identity of the attacker is still unknown.

It’s unclear if it was the same car, but moments later, witnesses said a vehicle rammed the gates of Parliament. It was reported that the driver got out and stabbed a police officer. Witnesses said the officer was still moving when the assailant took off running, as other police officers shouted at him to stop. When he didn’t comply, several shots rang out and the attacker was killed.

Inside the building, the House of Commons was meeting; everyone was instructed to remain inside. Prime Minister Theresa May was quickly reported as unharmed. Witnesses outside described the situation as confused and panicked, with people running in all directions and officers giving contradictory orders.

Emergency services treat the injured outside Parliament in London.

Police are treating the Westminster attack as a “terrorist incident.” pic.twitter.com/XZ4Xioh8JK

What made the incident even more haunting is that it occurred on the anniversary of the suicide bombings in Brussels that killed more than 30 people and injured at least 260. London has recently been spared from terror attacks–the last major attack in the city was the 2005 subway bombings that killed 52 people and injured more than 700. Now, London joins the list of European capitals that have recently been targets of terrorism. And there are similarities between some of the recent attacks–a vehicle was used as a weapon just like in France, Germany and Israel.

According to the Metropolitan Police in London, a “full counter terrorism investigation is already underway.” Police asked people to stay away from public areas in central London and to report any suspicious activities. Police also urged people to send in photos they took of the attacks. The head of counter terrorism, Mark Rowley, confirmed that four people are dead. “That includes the police officer that was protecting parliament and one man believed to be the attacker who was shot by a police firearms officer,” he said.

Some of the injured victims were a woman who either fell or jumped into the River Thames when the car crashed into the people on the bridge, and a group of visiting French students. Foreign Office minister Tobias Ellwood tried to revive the stabbed police officer outside of the parliament, but was unsuccessful. Lawmakers inside the House of Commons stayed on lockdown for two hours while police searched the whole building for any additional threats.

Andrew Bone was on a bus that was stopped on the bridge after the car had rammed into people and said, “I am of the generation who remembers I.R.A. bombs in London during The Troubles,” referring to the conflicts in Northern Ireland that lasted from 1968 to 1998. “We are not indifferent, but police have reacted with calm. I saw no panic.”

By Wednesday afternoon, police said the the attacker was Abu Izzadeen, who was born in London as Trevor Brooks. He was well known by authorities for his links to Islamic terrorism and had been to prison for funding, inciting, and praising terror acts. Reportedly he called for the killing of police officers and said he saw members of Parliament as infidels.

My thoughts are with the victims of the Westminster attack. Europe stands firm with the UK against terror and ready to help.

World leaders expressed their solidarity with London on Twitter, although President Donald Trump has yet to make a statement. The NYPD increased security at some high-profile locations around New York City, like the British Consulate, United Nations Mission, and Grand Central Terminal.

Emma Von Zeipel
Emma Von Zeipel is a staff writer at Law Street Media. She is originally from one of the islands of Stockholm, Sweden. After working for Democratic Voice of Burma in Thailand, she ended up in New York City. She has a BA in journalism from Stockholm University and is passionate about human rights, good books, horses, and European chocolate. Contact Emma at EVonZeipel@LawStreetMedia.com.
Share:
Related ItemsEuropeLondonParliamentRadical IslamShootingStabbingTerror AttackTerrorism