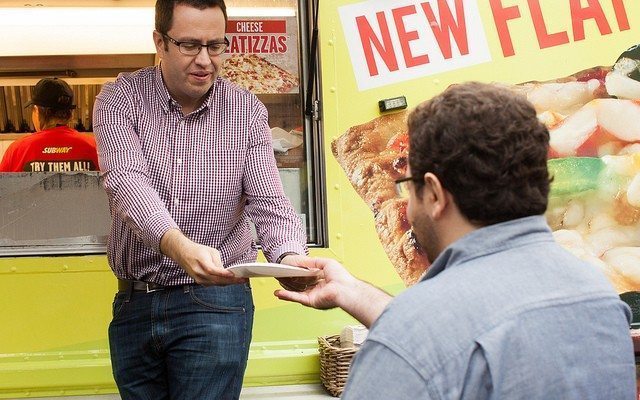 Former Subway spokesman Jared Fogle could face between five and 12.5 years in prison after agreeing to plead guilty Wednesday morning to traveling across state lines to have sex with minors and distributing child pornography, according to a plea agreement released by the U.S. Attorney of the Southern District of Indiana.

Today, Jared Fogle has been charged and has admitted to participating in a five-year criminal scheme to exploit children.

This is about using wealth, status, and secrecy to illegally exploit children.

This comes after an indictment released Wednesday explicitly detailed Fogle’s alleged crimes and involvement with co-conspirator Russell Taylor, the former director of his charitable organization the Jared Foundation.

From the court documents we’ve learned that between March 2011 and January 30, 2015, Taylor used hidden cameras concealed in clock radios in his current and former residences to “capture minors changing clothes, showering, bathing, or engaging in other activities.” He then distributed these images and videos to others including Fogle. The pair even discussed how the content was being obtained secretly, but rather than report Taylor’s activities Fogle “chose to benefit from [the production of the content] by obtaining access to a significant amount of such material.”

Between 2010 and 2013 Fogle also traveled from Indiana to New York City to pay to have sex with minors. He even offered one of his victims a “finders fee” if she could supply him more underage girls to have sex with.

Prosecutors agreed to not ask for a prison sentence shorter than five years or longer than 12.5 years per the agreement, but the court could still impose a sentence outside the recommendation. Normally child pornography charges carry a maximum 20-year prison sentence and the child sex charge carries a maximum sentence of 30 years.

In the agreement released by prosecutors, Fogle agreed to pay $1.4 million in restitution to 14 minor victims, who will receive $100,000 each. He has also been ordered to register as a sex offender, undergo treatment for sexual disorders, and submit to computer monitoring.

Fogle has become synonymous with Subway after his “Subway diet” story detailing how he lost 245 pound while exercising and eating Subway exclusively helped garner the sandwich chain national recognition as a healthier option for consumers. After the July raid on Fogle’s home, Subway announced that it had “mutually agreed” to suspend its relationship with him.

Now, Subway is quickly cutting all ties with their longtime spokesman, releasing the following statement via Twitter.

We no longer have a relationship with Jared and have no further comment.

However, Subway was quick to get flack for allowing its ill-timed “Jared’s Pants Dance” game to remain on its website, a mobile game that involved catching things in “Jared’s pants.” The game has since been removed.

Fogle’s wife was also quick to respond to her husband’s plea agreement saying she now wants out of the marriage. She released a statement through her attorney saying,

Obviously, I am extremely shocked and disappointed by the recent developments involving Jared. I am in the process of seeking a dissolution of the marriage. My focus is exclusively on the well-being of my children.

Having lost the support of both the public and his family, the disgraced advertising frontman’s reputation is beyond repair. Subway on the other hand may come out of the scandal unscathed, but that will depend on if the brand will be able maintain brand loyalty after their brand ambassador betrayed millions.

Alexis Evans
Alexis Evans is an Assistant Editor at Law Street and a Buckeye State native. She has a Bachelor’s Degree in Journalism and a minor in Business from Ohio University. Contact Alexis at aevans@LawStreetMedia.com.
Share:
Related ItemsChild PornJared FogleSubway